With nearly 50 percent of the vote, Alcorn defeated four other challengers in the election, which has been fraught with issues like development, traffic and infrastructure needs.

He maintained his sizable lead throughout the night.

The Hunter Mill District seat was vacated by veteran politician Cathy Hudgins earlier this year after she announced her intention to retire.

Unofficial election returns are below: 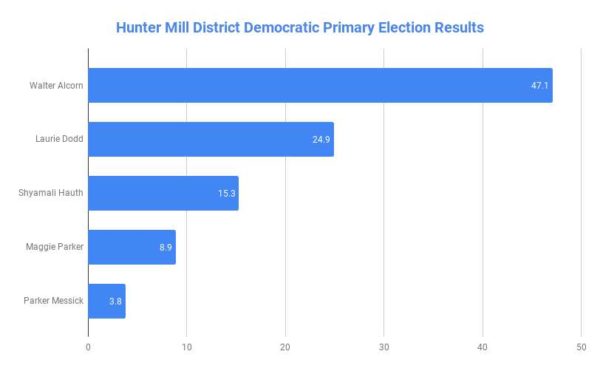 His name will head to the ballot in November. Alcorn wrote the following after the results were released:

It was a privilege to have shared the primary field with a record number of diverse Democrats who believe cooperation, unity, empowerment, and inclusivity are critical to Hunter Mill’s success. Winning the primary couldn’t have been possible without the support of all the volunteers and our union brothers and sisters who gave so generously of their time to make this happen.

I look forward to moving forward with the agenda I laid out in my campaign – including managing growth, protecting our green spaces, fully finding schools – and will work with all community stakeholders to ensure our district is working together to remove barriers to opportunities for all.

In previous interviews with Reston Now, Alcorn stated that he wants the county to manage infrastructure as new development continues in the area. He also wants to improve citizen engagement in the planning and development review process.

He says his biggest concerns are Reston’s population growth, affordable housing, and redevelopment of the community’s village centers.

Over the course of his campaign, Alcorn picked up dozens of notable endorsements, including a nod from Fairfax County Board of Supervisors Chairwoman Sharon Bulova.

In recent weeks, the local election was fraught with a dispute over whether or not campaigning was allowed at the Wiehle-Reston East Metro Station’s plaza, which is leased from the county to Comstock Companies.

Concerns voiced by Bulova over the company’s restrictions on free speech suggested Parker had an unfair advantage at the station.

Parker raised $258,225, with sizable backing from her employer. Alcorn raised $102,749 while the other candidates had significantly smaller coffers.

Overall, turnout in the county was just 5.4 percent. The Hunter Mill District had the highest turnout with 7.3 percent of registered voters participating.

Alcorn did not immediately return a request for comment.