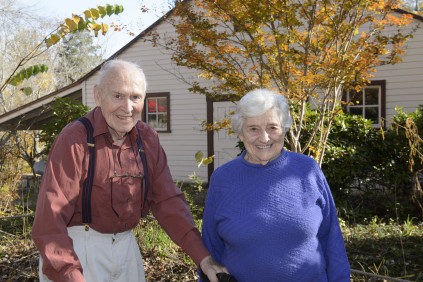 The Fairfax County Park Authority voted on July 25 to rename the barn in honor of Robert and Marjorie Lundegard. The board described the Lundegards as advocates who were “a major influence in getting park recommendations for Colvin Run implemented.”

FCPA wrote the following about the couple:

Robert Lundegard and his wife, Marjorie, spent much of their retirement time volunteering and spearheading preservation fundraising efforts at Colvin Run Mill. After Mr. Lundegard’s death in May of this year, he was hailed as a park icon and an “amazing guy” who would be remembered for his love of parks, in particular, Colvin Run Mill Historic Site. He was known as a dedicated and visionary leader who saw the importance and value of educating the public, especially school children, about Fairfax County’s colonial and 19th Century heritage. He pushed for the restoration of the mill and miller’s house, efforts which led to today’s fully operational facilities.

The barn will officially be renamed the Marjorie and Robert J. Lundegard Education Center. Park staff will work with the Friends of Colvin Run Mill to schedule a public ceremony to celebrate the facility’s naming.

The couple raised more than $50,000 to support Colvin Run Mill’s capital improvement plan, which includes renovation of the Miller’s House on the site and the building of a planned visitor education center. They were among the first members of the Friends of Colvin Run Mill when it formed in 1997.

They also raised funds for the mill through a partnership with a local consignment shop in McLean and through Marjorie’s written work about mills in the region.

END_OF_DOCUMENT_TOKEN_TO_BE_REPLACED

More Stories
Pet of the Week: Optimistic OrionReston Under Thunderstorm Warning Through The Afternoon