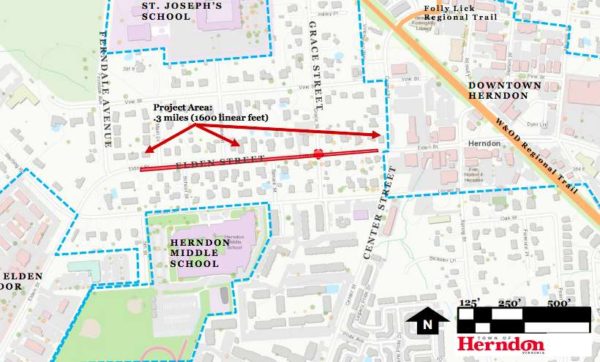 At the meeting, the commission approved the $1.8 million project, would brings critical pedestrian improvements to the area. Improvements include wider sidewalks, new curb ramps, landscaping, new crosswalks and new pedestrian signals at the intersection with Grace Street.

The town is seeking federal funding for the project through a set-aside application that can only be used for projects that address unsafe conditions, are near local schools, and cary significant volume of traffic.

“It is a very treacherous walk and so this is a very much needed improvement for our downtown and for that important corridor,” said commission chairwoman Melissa Jonas.

The project adopted a new name — Central Elden Street Walkability Improvements — to capture the scope of the project with more precision.

“We wanted this name to kind of stand out,” said Michael Wallick, the town’s transportation planner.

Commissioners clarified that improvements at the intersection of Center and Elden street — which has a large number of accidents in comparison to other local intersections — will be addressed by another project.

One resident said the median along that road is not wide enough to accommodate delivery vehicles that pull up at the median to unload deliveries. The planned width of that median is 11 feet — one foot more than the minimum state requirement, said John Jay, a civil engineer with the town.

Jay also noted that putting utilities underground is too costly and would exceed the budgeted amount of up to $2 million.