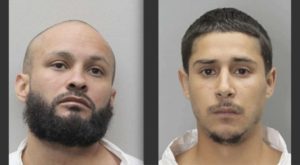 Herndon Police Chief Maggie DeBoard said the two Maryland men arrested on Labor Day in connection with an armed robbery, shooting at a police officer, and a carjacking in downtown Herndon have “extensive criminal histories” and may be connected to other similar incidents in the county.

At a debriefing before the Herndon Town Council earlier this week, DeBoard released new details about the incident that happened near Locust Street. She said police officers responded quickly and effectively, even though there were only four people on duty when the incident happened at around 7:20 p.m. that day.

Police believe the suspects were attempting to rob a business in downtown Herndon that evening. As the incident was unfolding, one of the two women assaulted by the men spotted a police cruiser parked in the store’s security camera footage. The woman alerted the police officer — who was filling out paperwork in the cruiser and happened to be near the scene at the time — about the armed robbery. The officer — whose name has not been disclosed — immediately began to chase the suspects as they fled from the business, police said.

During the foot pursuit, one of the suspects shot at the police officer. The officer responded by shooting back. No one was injured or hit during the exchange, police said.

Sandoval was arrested with the help of two off-duty police officers and an EMT from the Fairfax County Fire and Rescue Department. After a brief search, Casco was arrested nearly thirty minutes later after police received a report of a carjacking up the street near Guapos.

The Fairfax County Police Department has taken over the criminal investigation due to the town’s limited resources, DeBoard said. The officer-involved shooting was a first for all three commanders on the scene at the time, she said.

“When you have an incident of this magnitude and this high enough of a threat, it becomes extremely dangerous and challenging,” DeBoard told the council.

The Herndon Police Department is conducting an internal affairs investigation. The county’s Commonwealth Attorney will determine if the police officer’s use of a gun was justified. Thus far, the suspects have not been charged with attempted capital murder.

The incident was captured with body camera footage. DeBoard also said the Herndon Town Council’s $25,000 investment in technology to track police cruisers helped police respond to the scene by tracking the cruiser.

Details about the business robbed by the suspects, the names of the victims, and the name of the officer will not be released for privacy and safety reasons, the police chief said. The department may release the officer’s name later this week if it determines there is no threat to safety.