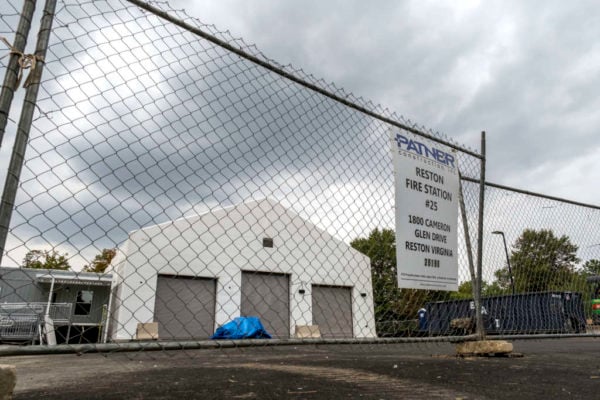 A temporary fire station in Reston is almost ready for fire and rescue personnel to use while they await their new, permanent station.

Built in the early 1970s, Reston Fire and Rescue Station 25 is set to get demolished this fall and replaced with a new fire station at 1820 Wiehle Avenue.

Construction is set to begin later this year on the new fire station, which will more than double the size of the current department. The project is expected to cost $14.8 million.

“We are not planning a groundbreaking as this new permanent station is a replacement station not a new one to Fairfax County,” Ashley Hildebrandt, a fire department spokesperson, told Reston Now. “We will have a grand opening once the station is built.”

Until the new fire station is finished, fire and rescue personnel will use a temporary fire station at 1800 Cameron Glen Drive near the North County Government Center.

The temporary station consists of trailers and a large tent.

“The temporary fire station is in the final stages of construction,” Hildebrandt said. “Personnel are preparing to move into the temporary station in October.”