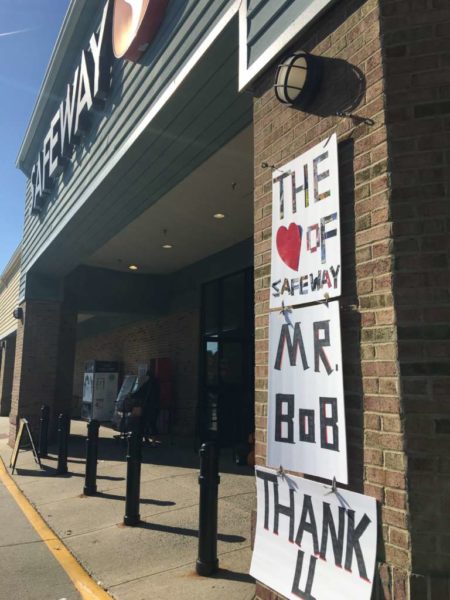 Over the weekend, community members gathered at the Safeway in South Lakes Village Center as “Mr. Bob,” who has worked at the grocery store for more than 40 years, completed his last day of work.

Residents launched a crowdfunding campaign to raise funds for “Mr. Bob.” As of today (Monday), the campaign raised $3,325 of its $3,500 goal.

Reston resident Suzannah Simmons, who organized the page, wrote the following on the page:

Bob at South Llakes Safeway is known by everyone who shops there for his smile, help, and overall amazing disposition. He has worked for Safeway for over 40 years! He even has lollipops for all the kids and some “kids” who are now in their 40s have never known Safeway without Mr.Bob. Most regular shoppers always wait for his register even when other cashiers are open. We are so sad that he is retiring, but are taking donations to give him a retirement “thank- you” gift from his community.

His last day was on Sunday (Sept. 15). Residents and shoppers gifted him the money, which was raised over the last week.