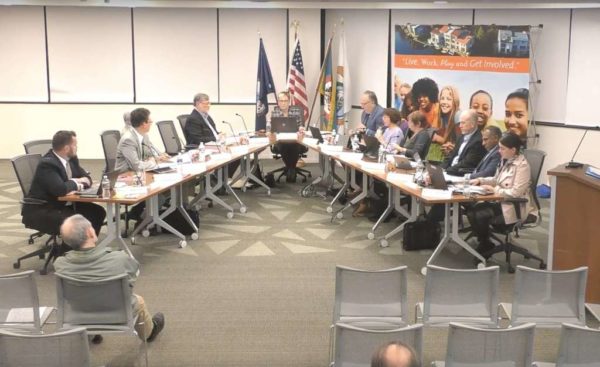 Reston Association’s 2020-2021 budget, which would increase member assessments by five percent, will likely include across-the-board salaries increases for all staff. The move, which allocates $1 million over the next two years for salary and benefit increases, comes in response to unprecedented turnover last year and ongoing concerns related to staff recruitment and retention.

Last night (Thursday), RA’s Board of Directors also voted to approve reclassifying the positions of four staff members — whose names and salaries were not disclosed — because their positions were misclassified by RA. Board member Ven Iyer — who frequently challenged matters discussed by the board throughout the meeting — was the lone dissenting vote.

The board’s decisions were guided by a compensation study authorized by RA CEO Hank Lynch and conducted by Archer Company, a South-Carolina based firm that offers human resource management.

The study provided the basis for a one-time salary increase of 2.6 percent for all employees to “offset [the] recent below market merit pool,” as well as an increase in retirement match contributions and ensuring salaries are at or above the market rate within five years of service.

The board also expressed support for a documented compensation philosophy that aims to attract talent and offer salaries and benefits that are similar to comparable entities.

Board member John Mooney said the proposed compensation philosophy was “very balanced” and ensures RA is competitive with other similar employers, including the staff in municipal or county-level government positions in Fairfax and Arlington counties.

Iyer questioned if the comparison of RA to public entities with significantly larger budgets and resources was appropriate.

He also challenged the labeling of several documents received by the board with disclaimers like “RA board’s eyes only” and “extremely confidential” — a move that he said violates members’ trust because the materials were unrelated to contractual or business matters. RA declined to release the materials referenced by Iyer to Reston Now.

RA’s general counsel, Anthony Champ, said the documents were provided as background information to the board and their confidentiality could be assessed if an RA member requested the materials.

The organization’s fiscal committee was not consulted about the salary and benefits increases, Iyer, who is the board’s committee liaison, also stated.

The majority of the board, however, concurred with the need to increase salaries in accordance with the Archer study’s recommendations.

Board President Cathy Baum said the proposed salary and benefits increases were “logical” — challenging Iyer’s assertion that the board was acting based on emotion, not fact.

Iyer, however, said the Archer study was not prescriptive and instead pitched broad recommendations that were subject to the scrutiny of the board.

As the budget heads for adoption in November, Lynch said he hopes RA’s new outlook on compensation and benefits will provide market-based incentives to recruit and retain top talent.