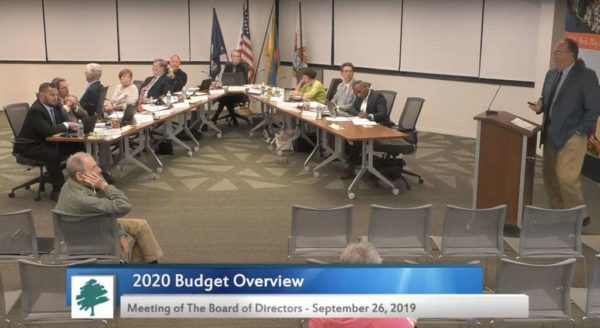 Members assessments could increase by five percent in 2020, according to the first budget draft reviewed by the Reston Association Board of Directors Thursday night.

The plan, which will undergo revisions before a final board vote in November, pitches increasing the rate to $728, a $35 increase from the previous year. The current assessment rate is $693, an $11 increase from the 2018 rate.

At the Thursday meeting, RA’s CEO Hank Lynch — who has been working with staff over the last several months to identify new and creative ways to manage RA’s budget — explained the changes to the fee as “an increase of less than 10 cents per day.”

The budget would also fund five additional employees for covenants, social media IT to address a members’ request for a community app and other needs, land use, member services, and business engagement and sales to find ways to grow non-assessment revenue.

In a recent news release, Reston Association indicated that the member assessment rate would “avoid the past practice of using the association’s reserve funds to pay down the fee.” That financial practice was used by the board in over the last three years — a move that underwrote assessment rates by roughly $1.7 million in supplements.

Lynch said he hopes to find new resources of non-assessment revenue in the future in order to avoid using surplus cash to pay down fees.

In a statement on RA’s website, Lynch said that practice was unsustainable.

A working session on the budget is planned in October.