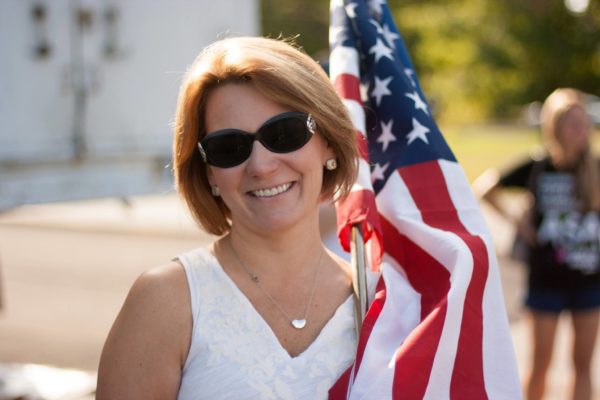 As Lisa Merkel wraps up her final term as the Town of Herndon’s mayor, she took a moment to reflect and talk to Reston Now about her experiences in office.

Merkel made town history as the first woman elected into the position in 2012 after serving as Herndon’s vice mayor during the 2010-2012 term.

According to Merkel, her decision to not seek re-election wasn’t based on any specific motive, besides a wish to spend time with her family and dedicate more time to volunteering around the community.

“I still plan on being involved in the town,” she told Reston Now.

Merkel told Reston Now her accomplishments include implementation of the Metrorail Expansion Project, the ongoing development of downtown Herndon and the establishment of the Economic Development Department.

“I’m really proud we’ve embraced the business community,” Merkel said, adding that — due to her efforts — the tax rate is now split evenly between residential and commercial incomes.

Many of the local businesses even give back to the community by acting as sponsors for official events like the annual holiday parade, which Merkel said is the largest event of the year.

“Sometimes it’s really the smaller things that get attention,” Merkel told Reston Now, adding that small projects make a huge difference in the town and help to develop a sense of place.

Merkel has faced some roadblocks, though, during her time in office.

She said she had trouble communicating with the public that development projects in the town won’t threaten the small community feel, which she said is at the heart of Herndon’s identity.

“There was a fear that if we started building like that at the Metro station, it would trickle into downtown,” Merkel said. “We had to reassure people that Herndon won’t be a bunch of highrises.”

During her final months in office, Merkel said she hopes to oversee the groundbreaking on the downtown Herndon project and continue to work on installing underground utilities around town.

Going forward, Merkel said she won’t endorse any particular candidate for the upcoming election. But she hopes the next mayor will be an effective listener, willing to consider other perspectives on topics and won’t be afraid to seek counsel on issues they aren’t familiar with.

She encourages anyone passionate about their community to run, regardless of their political experience.

“Don’t mix national policy issues with town issues because we don’t have jurisdiction over those things,” Merkel said. “You don’t want to alienate any of your constituents with issues that don’t relate to the job. That’s been my philosophy.”