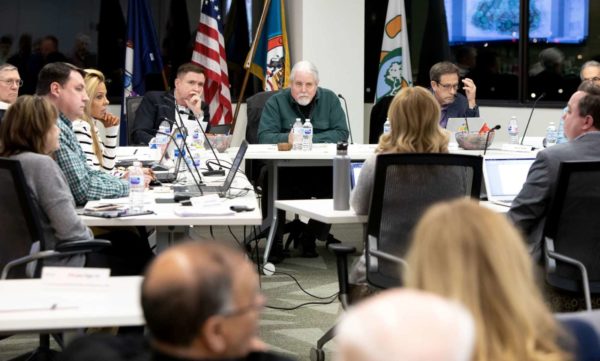 The Reston Association’s Design Review Board bid farewell to two longtime architects and board members this month.

Reston Now caught up with the retired board members to get their thoughts on how the board has changed since they joined the DRB, as well as their top concerns as Reston continues to grow over the coming years.

After a 21 year tenure on the DRB, quite a bit has changed in Reston. Probably the largest aesthetic and environmental impact I’ve seen in Reston is the intense development occurring in the Toll Road corridor. We’ve seen the Transit Corridor vacate all of their covenants in 2011 in their effort to allow residential development along the Toll Road. At the same time, the owners removed their own Architectural Review Board…leaving no entity to review any of the “Transit Area’s” designs. It’s pretty obvious Reston has lost a lot of its Planned Community identity by this intense development without any design review of the Transit Area.

When I first became a member of the Design Review Board (DRB) in 1999, Reston wasn’t completely built out…there were remaining residential lots still available. Many of our clusters were aging, and to this day, remain targets of developers seeking profits with dense residential proposals. Intense “internal” development is a continuing concern to the essence of Reston. The DRB has been instrumental in working with these developers to make their proposals more contextual and with a density more appropriate to the neighborhood. This continues to be a major challenge to our community. Growth and change are going to happen, but the strength of Reston’s initial Governing Documents that created the DRB, gives our members a chance and a voice to affect any future development. It is important for our members to remain aware of all development proposals and become a part of the process.

Our Stream Restoration has been a major success and provided both safety and beauty to our forests and valleys. Snakeden Branch was the first and perhaps the most controversial. It launched a major environmental solution to the years of development and lack of stormwater management in the county. Now, 15 years later, the forest that surrounds Snakeden Branch has returned, and the stream monitoring has kept all in place for years to come. The restored areas have certainly assisted in solving some of the run-off issues that have plagues Reston sine its inception.

Serving on the DRB for these years has been a personal community involvement and educational experience for me. It has been a way to get to know our planned community with its many architectural styles and association members. At the same time, it has made me aware of the boundaries of our PRC and the areas of the DRB’s purview. The “shotgun” developing happening in the Corridor is certainly not Reston-like or internally coordinated. This was an enormous opportunity for the developers to continue the nature of a planned community, but they have consistently maximized their particular development to the exclusion of the potential of a beneficial design opportunity.

Our clusters are aging, and every week at our DRB meetings we have Cluster Boards coming to us with concerns and desired revisions to update their Cluster Standards. It is imperative our clusters continue to work together and with the RA Covenants Staff toward this updating. The Cluster Boards must be more active and part of the process. There remains much to do to keep Reston as the flagship of a planned community. Our Village Centers will be coming under the developers gaze as more development opportunity for them. I’m sure the remaining (and new) members of the DRB will be up to the task, and hold on to all that makes Reston such a wonderful place to live.

How has the DRB’s role evolved as Reston has evolved?

In some ways, DRB’s role is the same as originally set forth in the Governing Documents: ensuring quality design that is harmonious with nature and neighboring architectural context. However, with intensifying redevelopment of older neighborhoods, the bar is raised, and the challenges to meeting the goals of design review are more significant than ever. Reston needs to evolve with the times, but we must respect existing context and neighborhoods in the process. Design Review helps ensure orderly redevelopment with continued emphasis on context and good design, understanding and mitigating the impact of redevelopment that in most cases is overly intensive upon first review. The role of the DRB today more than ever is a first defense against redevelopment that is inconsistent (sometimes entirely inconsistent) with the design goals of Reston.

What would you say has been the most rewarding part of serving on the board?

Working to keep our neighborhoods and clusters harmonious and compatible; ensuring that redevelopment understands how Reston is different from much of the rest of Northern Virginia; keeping a focus on the natural areas, lakes, trails and recreational facilities that truly make Reston a great place to live, work and play. Reston has been, and should continue to be, a special place to live in Northern Virginia. The DRB helps ensure that, and when we do our job well, it is exceedingly rewarding. The things we do well, very few people notice; when we miss an element of new development, we see those mistakes for years to come.  Our goal is consistent, careful, thoughtful review.  As a volunteer, my greatest satisfaction comes from believing I’ve used my skills and talents as an architect to keep Reston a special place to live.

What are the top three challenges the DRB faces as Reston grows as a community?

More Stories
Pet of the Week: HazelGreat Falls Dips in Rankings for ‘100 Richest Places’ in America