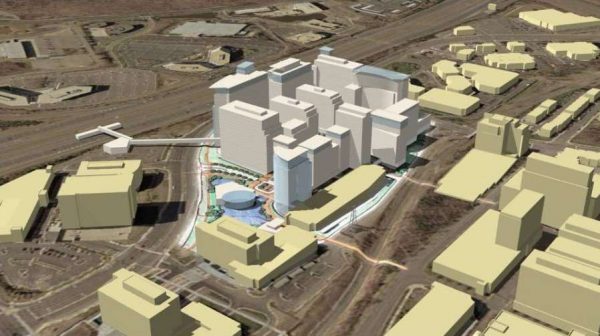 The Fairfax County Board of Supervisors unanimously voted in favor of deferring a decision on a request to reduce parking at a major mixed-use project near the future Reston Town Center Metro Station.

Hunter Mill District Supervisor Walter Alcorn (D) motioned that the board postpone a decision on the proposal by Boston Properties to a later date.

The developer is seeking to provide 1,663 fewer parking spaces than what was already approved for Reston Gateway, a mixed-use development currently under construction between Reston Town Center Metro Station and RTC.

Alcorn said that he wants to take a closer look at the assumptions Boston Properties used to guide its decision. For example, the company assumes that “residents and visitors to the development will require parking at rates no higher than similarly-located transit-oriented development in Arlington,” he said.

Overall, the proposal aims to reduce parking by 20 percent. Residential parking for the 2,010 units planned on the site would take the biggest hit, with an average reduction of 38 percent.

So far, county staff backed Boston Properties’ proposal, which it says is acceptable because of the site’s proximity to the Metro station and the need to reduce parking demand by encouraging other modes of transportation.

Reston Gateway includes nine buildings spread over 33 acres. The first phase of the project — which includes office space anchored by Fannie Mae — is currently under construction.