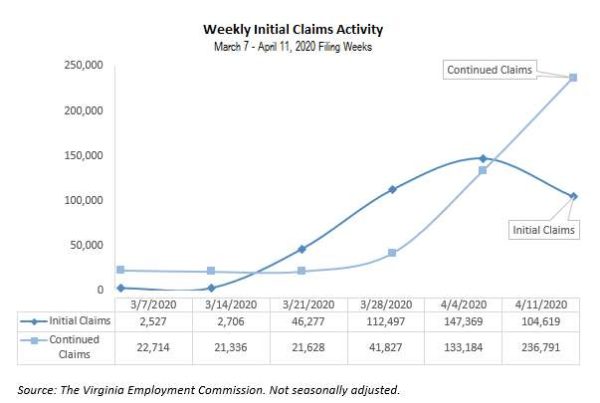 Unemployment claims due to the economic fallout of the coronavirus pandemic continue to pour in.

Nearly 14,500 Fairfax County residents filed unemployment claims on the week of April 11, according to the latest unemployment data.

Overall, the number of statewide claims between March 21 and April 11 — 410,762 — is only 67,000 fewer than the average of all initial claims filed during the last three economic recessions, according to the Virginia Employment Commission. More than 121,000 Northern Virginia residents have filed claims since business closures began.

The latest claims figure, however, represents a decrease of 42,750 statewide claims and 6,848 countywide claims from the previous week, according to data from the commission.

The commission noted that the overall 29 percent decrease in the number of claims suggests that most people filed unemployment claims during the week of April 4.

Here’s more from the commission:

Initial claims measure emerging unemployment and the recent increase in initial claims in the Commonwealth is clearly attributable to impacts from the COVID-19 virus. The accommodation and food service industries have comprised the majority of these initial claims. Because of their prevalence in those and other affected industries like retail and health care, younger workers and female workers have been disproportionally impacted. The number of initial claims filed during the week ending April 11, 2020 was 45.6 times higher than the comparable 2019 week–an increase of 102,326 claims.

Despite a dip in the number of claims, the commission noted that claims still remain at historically high levels.

On the national level, the number of initial claims has totaled roughly 5.2 million, a decrease of 1.4 million from the previous week. During a comparable week in 2019, only 196,364 claims were filed countrywide.