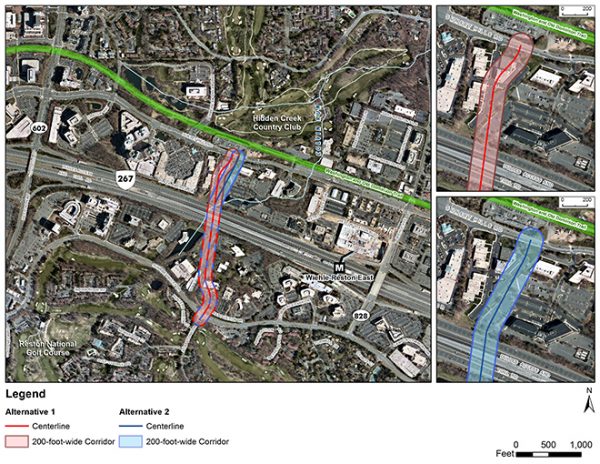 The total project, which is located west of the Wiehe-Reston East Metro Station and includes a new bridge over the Dulles Corridor, is expected to cost $214 million overall. Construction is not expected to begin until 2028, according to the March 5 proposal.

Once built, the road would extend from the existing north-south Soapstone Drive where it intersects with Sunrise Valley Drive. After crossing the Dulles Corridor, the new road would stop at a new intersection with Sunset Hills Road. Most of the road will include a three-lane cross-section with bicycle lanes on each side.

A five-foot-wide concrete sidewalk is planned on the west side and a 10-foot-wide shared-use path on the east side.

Here’s more from the proposal:

The proposed roadway would provide an addiƟonal crossing to supplement two exisƟng crossings of the Dulles Corridor in Reston: Reston Parkway and Wiehle Avenue. The project would provide addiƟonal capacity across the Dulles Corridor, reduce congesƟon and delay at intersecƟons along Wiehle Avenue, and improve accessibility and mobility to and within the area surrounding the WiehleReston East Metrorail StaƟon. By including bike lanes, sidewalks and an addiƟonal facility for local and regional transit operators to uƟlize, the project improves mulƟmodal connecƟvity to the Wiehle-Reston East Metrorail StaƟon.

The NVTA will select projects from a number of proposals across the region. Funding is offered through its six-year FY2020-2025 program.