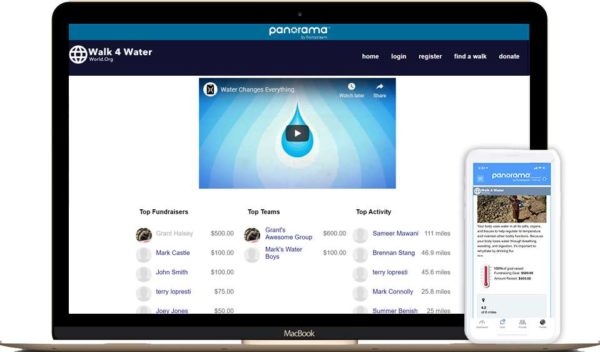 Panorama allows nonprofits to host walks, runs and other athletic events and track the participants’ distance and time, which is a feature completely unique to the company, according to Terry LoPresti, FrontStream’s chief technology officer.

To help keep event participants engaged, the software offers gamification and real-time competition with others involved in the fundraiser, according to LoPresti, who said examples include the ability to earn special badges or set the view so users can pretend to be in the Swiss Alps.

Instead of canceling events due to the COVID-19 pandemic, people are contacting FrontStream to host events digitally and learning how this software can simplify the fundraising process, according to LoPresti.

Once a client contacts the FrontStream team about hosting an event, she said they can “have them up and running within an afternoon.”

Given the complexity of the app, users and event organizers can customize features to suit their needs, according to the website.

For example, credit card companies often charge processing fees with any system that uses card transactions, but users can choose to cover these minimal fees so their donation goes directly to the charity, LoPresti said. If given the chance, almost all of the donors will choose to cover the transaction fee, ultimately saving the nonprofit money, according to LoPresti.

Though FrontStream wouldn’t share how much it costs to host a certain event on Panorama, LoPresti said that without customizations, it could theoretically be done for free.

LoPresti stressed that the software isn’t a temporary trend, but instead a long-term, fundamental shift for fundraising that works for organizations of all sizes.

“Taking your event digital is not temporary,” LoPresti said. “It isn’t here just cause of COVID. It is here to stay. It has forever changed the face of fundraising because we can engage on so many levels.”