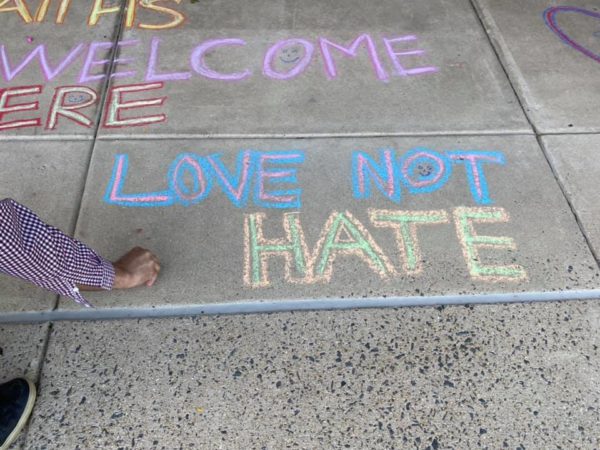 After someone spread hateful symbols and messages across Reston, a social media group decided to rally and reject the graffiti with colorful, inclusive and tolerant messages of their own.

Chalk Hooligans, a social media vigilante-type group founded in 2016, decided to revive its mission and stand alongside community members of Reston by spreading words of love, appreciation and hope along with pleasant pictures drawn with chalk on public sidewalks.

In the past, the group posted photos of support in places of worship that were being targeted by hateful acts.

“When your neighbors have hate thrown at them, cover them with a blanket (or sidewalk) of love,” said one post.

“What heartened me and I hope it will you, too, is that neighbors came together and bought food for the workers who were removing the spray paint,” Alcorn wrote.

Virginia Senator Tim Kaine also condemned the hate with a post on Twitter, praising a sign put up in a local window about loving your neighbor and staying “Reston Strong.”

Vandals spraypainted swastikas on the sidewalk at North Point Shopping Center in Reston. The Hooligans showed up to cover it with love. @KenPlum1 @GerryConnolly @RestonOnline @fairfaxcounty @GovernorVA pic.twitter.com/CCCR6WRXmS

To the authors of this sign, the workers who removed spray-painted swastikas from the North Point Village Center, and to all who are working to bring their communities closer together during difficult times: I'm grateful for you. Hate has no place here. https://t.co/kKmf5CPi1A pic.twitter.com/5Xtv4OsQsB