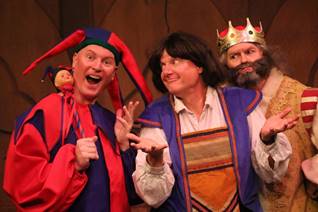 The show will consist of the directors, Reed Martin and Austin Tichenor, who plan to tell stories about Reduced Shakespeare Company, take audience questions, and give behind the scenes footage from the company. The experience will be interactive and is geared towards anyone interested in the company or theater.

They will also include a scene from Hamlet’s Big Adventure (a prequel), which was supposed to perform on July 12, and has been rescheduled for March 23 and 24, 2021, according to a statement by the company

“The RSC has performed at the CenterStage every single year since 1987,” said the Reston Community Center Arts and Events Director Paul Douglas Michnewicz. Tichenor also stated that the community center and RSC have a long relationship, one of the “best relationships in showbiz history.”

One of their performances, The Complete Works of the Reduced Shakespeare Company (abridged), included seven of their nine shows and lasted for two whole weeks.

“The show must go on… line,” quipped Tichenor in a Youtube video promoting the event.

The two directors said that “a good, socially distanced time will be had by all.”