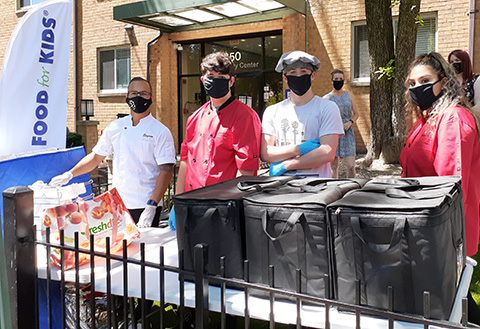 Herndon High School third-place finishers in Real Food for Kids’ annual culinary contest were given the opportunity to replicate their winning recipe for community members in need.

The team consisted of Liam Owens, Eli Shifflett, Alex Chang and Ivonne Claros-Vigil. Their recipe, Carne Asada Tacos with Asian Slaw, was replicated for the Chefs Feeding Families’ Mighty Meals Program to feed those in need, according to a statement from Fairfax County Public Schools.

The four students were invited to help with the distribution of meals at Harvey Hall Apartments in Arlington earlier this summer, according to the statement.

“When I found out that our recipe was going to help out with people in need, it made it more exciting and more nerve-racking because it’s a really good feeling knowing that you’re helping people and you’re helping the community,” said Claros-Vigil in the statement.

Claros-Vigil credits her Gourmet Foods class with her success because of the wide variety of spices, foods and traditions they learned. Her background also includes lots of cooking with her mom, which gave her experience cooking new things.

The competition gave students the opportunity to experience how they can create change in a community while innovating in the kitchen, according to Mary Porter of RFFK in the statement. Connecting the competition to Chefs Feeding Families and helping families in need allowed the students to see their work come “full circle,” said Porter.

“You ever want to grow a relationship with someone? Cook, bake etc., just hop into the kitchen and let your maker mind go to work,” said Owens in the statement. “The goal and challenge of the meal is what was fun.”