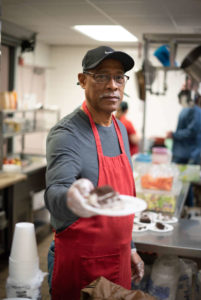 When Gov. Ralph Northam issued his stay-at-home order in March, Maura Williams, a social worker at a Reston homeless shelter said she knew “this is going to change everything that we’re doing.”

Williams, who is the division director for housing and community services for Cornerstones, a non-profit that runs the Embry Rucker Community Shelter on Bowman Towne Drive in Reston, said when the COVID-19 pandemic first hit, staff had to scramble to stay open.

As businesses were closing their offices and sending employees home, Embry Rucker which houses 24 single adults and 11 families, did not have the option to send its residents elsewhere — not without a plan at least.

“The homeless don’t have the option of staying at home,” said Greg White, chief operating officer of Cornerstones. “So I believed that we always have to provide staff to work with our unsheltered and homeless population.”

With much of the country still reeling from the COVID-19 pandemic and the recession it caused, things have remained steady at Embry Rucker, staff said. The demand for their services has remained the same, even with the economic downturn, and staff has found ways to keep the shelter open during the pandemic.

Like many homeless shelters, Embry Rucker has had to implement social distancing measures including housing about half of their residents at a nearby hotel and having some staff work from home. Those who do work at the shelter are required to wear masks.

As is increasingly becoming the norm in many places, the shelter now requires temperature checks for those who enter and has contracted with an outside company to test residents who have symptoms for COVID-19. Residents who test positive, self isolate at a nearby hotel the shelter has partnered with.

Thanks to funding from the federal CARES Act, which Congress passed back in March to give temporary relief to Americans affected by the pandemic, the shelter has used the federal funds to provide rental assistance to those struggling to pay the bills in the pandemic induced recession.

But the ease in which the shelter has handled the pandemic could change quickly Williams said, whenever state and federal eviction moratoriums are lifted and landlords start removing tenants who have not paid their rent. So far, the shelter has seen an increase in its rental assistance program — something that has become a point of emphasis as many people in Fairfax County are out of work and are past due on their rent payments.

The federal funding the shelter received from the CARES Act will only last until the end of the year, a spokesperson for the shelter said, meaning it could become harder to help the ever-growing list of people behind on their rent and mortgage payments.

“I think we are maintaining now. I think we’re holding on, but I think we are all anticipating when the eviction moratorium is discontinued that we are defiantly going to see a very huge housing crisis,” Williams said.