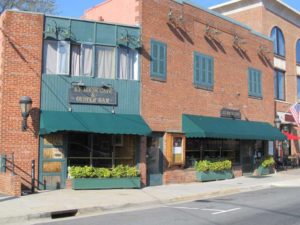 The redevelopment of downtown Herndon into a mixed-use project by real estate developer Comstock and the Town of Herndon is set to transform a portion of the downtown area.

But as some buildings long vacated by property owners sit in suburban malaise, the Town of Herndon is considering more ways to further revitalize the area.

At a meeting Tuesday night, the Herndon Town Council discussed a plan to create tax incentives for specific areas in downtown Herndon by creating a new zoning term — art-focused redevelopment — that would entitle some developers and property owners to economic incentives like tax rebates for up to a decade and reduced water availability fees.

In order to qualify as an arts-focused redevelopment project, the project must be located in the town’s Planned Development Traditional Downtown zoning district, which is depicted in the map below. 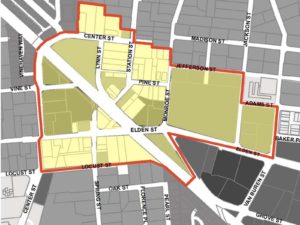 In response to questions about the financial implications of the policy, town manager Bill Ashton clarified that the incentive program creates an additional tool for the town’s toolbox to encourage economic development.

“We will end up no worse than where we are,” Ashton told the council last night.

He says that new property owners in the area have expressed interest in redevelopment but need additional incentives to proceed with new projects.

“It is difficult to activate them because the incentives aren’t there for redevelopment,” Ashton said.

In some cases, properties in the area have long sat vacant. The Ice House Cafe and Bar in downtown Herndon has been closed since late 2018, for example.

Councilmember Cesar del Aguila pressed staff for more clarity on how the policy would secure the town’s financial position.

Town Attorney Lisa Yeatts noted that the policy would result in “long-term gain” for the town.

Ashton added that it is difficult to determine the extent of the payoff because the answer depends on interest in the program as well as the type of projects suggested.

The Herndon Town Council is expected to vote on the proposal at a meeting next week.