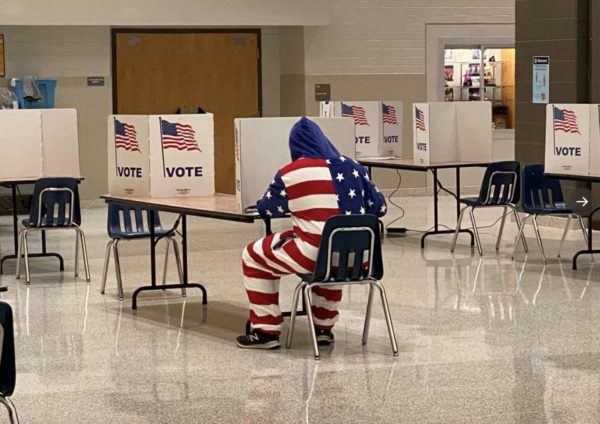 Even as ballots are cast today, Fairfax County is already boasting a record turnout,  thanks in large part to a surge in early voting.

Before Election Day, 399,600 votes were cast, equaling 70 percent of the total votes cast in the 2016 presidential election.

It’s still unclear if the county will break its 2016 record of 82.5 percent,  which exceeded the statewide average.

As of 4 p.m. today, county officials estimate a 16.1 percentage voter turnout for today and an overall turnout of roughly 71 percent.

This is 11 am at the Reston precinct in Lake Anne Village Community Center – a good time to vote! #HunterMill #vote #Election2020 pic.twitter.com/dvFUTdl6Bh

With early voting taken into account, that turnout jumps to 51 percent. Voters turnout out in drives due in part to legislation allowing no-excuse absentee voting this year.

Despite concerns about voter intimidation in the lead-up to Election Day, Fairfax County public information officer Brian Worthy says the county has not experienced any issues with voting at its 244 precincts so far, and turnout has been “light as expected” due to the high levels of early voters.