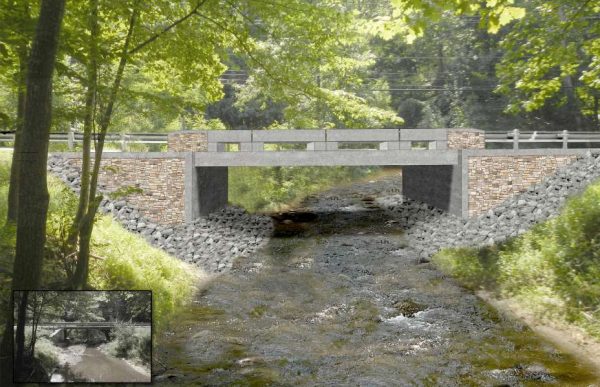 The Fairfax County Board of Supervisors in its meeting Tuesday unanimously approved the construction of a new bridge on Hunter Mill Road  over Colvin Run.

Construction of the bridge is planned to begin in spring 2021, with a completion date set for the summer of 2022.

The bridge is projected to cost $5.5 million and will be primarily funded by Virginia Department of Transportation (VDOT) through the State of Good Repair program. The cost was initially estimated by VDOT at $3 million in February 2019, and was anticipated to cost $5.1 million in VDOT’s May 2020 update.

Fairfax County will contribute $408,000 for pedestrian improvements south of the new bridge. The county’s contributions will fund the construction of a splitter island, median refuge, and rectangular rapid flashing beacons.

The new bridge will have two 11-foot lanes and include a three-foot-wide grass median that will match the existing roadway. It is also been designed to allow a future trail crossing over Colvin Run south of the bridge and abutments for a new trail bridge over the creek.

Traffic operations will be maintained while the bridge is built. The current one-lane bridge was built in 1974 and was ruled to be deteriorating rapidly by VDOT after an inspection in February of this year. The bridge averages 8,500 vehicles crossing it daily, according to VDOT.

The bridge was repaired in 2012 and 2016 to maintain the integrity of the structure. Further improvements were made in February to temporarily strengthen it by adding wooden beams between the bridge’s I-beams.

The construction of the bridge falls in line with the Fairfax County Transportation Plan that the Board of Supervisors adopted in 2006.  Adoption of this project came after an initial public information meeting with VDOT in April 2018, virtual public involvement in May and June of this year, and finally a virtual design public hearing in September.