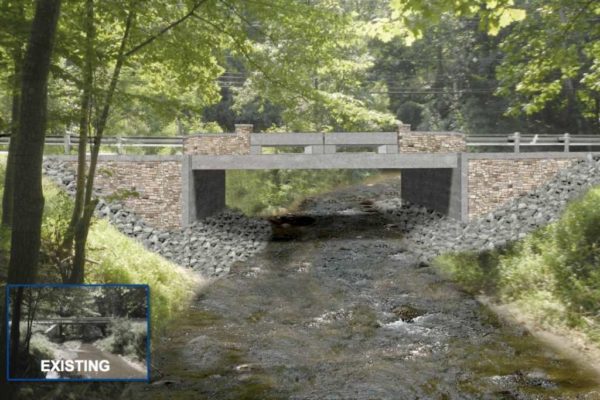 A virtual public hearing to learn about and discuss a proposed replacement for the bridge on Hunter Mill Road (Route 674) over Colvin Run is set for Wednesday, Sept. 16.

The Virginia Department of Transportation (VDOT) project team is set to begin its presentation at 7 p.m., and team members will be available to answer questions after the presentation of the proposal until 8:30 p.m.

The proposed plan for the bridge – which was built in 1974 – has construction beginning in spring 2021.

Under the plan, the new bridge will replace the one-way, 16-foot-wide lane with a two-way crossing with 11-foot lanes. Plans also include a three-foot-wide grass median.

Additional items within the project include an improved trail crossing south of the bridge and abutments for a new trail bridge over Colvin Run that the county will construct at a later date.

Previous improvements to the bridge were made in 2012 and 2016 to maintain the integrity of the structure.

While initial costs were estimated at $3 million in February 2019, the proposed plan is anticipated to cost $5.1 million. The project will be financed with state funding through the State of Good Repair program that will cover $4.7 million of the project, while Fairfax County funding is estimated at $408,000, according to VDOT’s project update in May.

Interested persons may register for the virtual meeting at virginiadot.org/huntermillcolvinrun. Anyone wishing to participate offline, without registering, may call 877-309-2074 (use access code 635-767-879) to listen in.

Any comments following the meeting on Wednesday regarding VDOT’s plan for this project must be submitted by Sept. 28, 2020, on the project website, or by mail to Mr. Vicente Valeza, P.E., Virginia Department of Transportation, 4975 Alliance Drive, Fairfax, VA 22030, or by emailing [email protected] Emails should reference “Hunter Mill Road over Colvin Run Bridge Replacement” in the subject line.