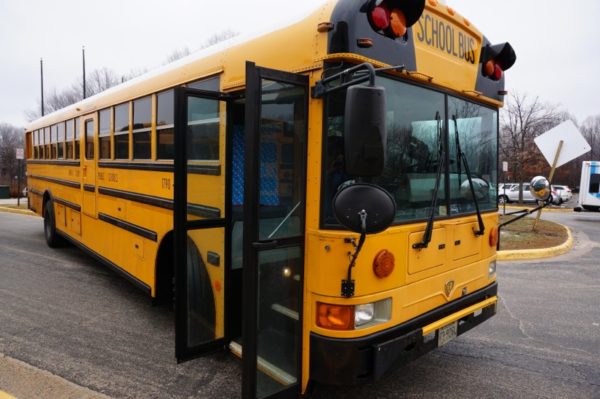 Fairfax County Public Schools is getting its first electric school bus today as part of a statewide initiative led by Dominion Energy.

The bus is expected to arrive at the Stonecroft Transportation Center in Chantilly. It is the first of eight vehicles that FCPS will receive from Dominion in an initial deployment of 50 buses throughout Virginia.

FCPS says it anticipates getting the remaining seven buses by the end of January.

Made by Thomas Built Buses, the new vehicles will join Fairfax County’s fleet of approximately 1,625 diesel-fueled school buses, one of the largest in the country.

“Electric school buses in FCPS will benefit not only the school division and its community, but the entire national capital area,” FCPS says. “…They will help reduce carbon emissions, serve as a resource for national emergency planning efforts, and provide stability and capacity to the grid with meeting increasing energy demands.”

While electric buses are more expensive to purchase than diesel ones, they are cheaper to maintain and operate. FCPS is covering the difference in the initial cost with a grant from Dominion Energy, which also funded the installation of electric charging infrastructure at the Stonecroft facility and is responsible for maintaining the equipment.

FCPS says training for bus drivers, maintenance technicians, and other staff will start once the first bus arrives. The vehicles will undergo testing before being assigned to routes in early to mid-April, though whether there will be any students for them to transport at that time remains to be seen.

The arrival of Fairfax County’s first electric bus is a welcome step forward for community members and public officials who have been advocating for a transition to electric vehicles, citing health and financial benefits as well as environmental ones.

One of the most prominent advocates for electric school buses has been the Fairfax County branch of the national climate advocacy group Mothers Out Front, which launched a campaign in 2019 calling on FCPS to commit to converting its entire fleet to electric power by 2024.

“We are so excited for Fairfax to get its electric school buses on the ground and running,” Mothers Out Front Fairfax co-leader Barbara Monacella said in a statement. “…Every electric school bus we add to our fleet reduces the air pollution from diesel that harms our kids’ health, and brings us closer to our goal of converting every bus in order to reduce emissions and fight climate change.”

The community advocacy group has teamed up again with Del. Mark Keam (D-35th) on legislation that would create a state fund for school districts to purchase electric buses, a move aimed at addressing concerns about the amount of control Dominion has over the current initiative.

Last year, lawmakers opted to pursue the utility company’s pilot program instead, but Monacella says Keam will reintroduce his bill when the Virginia General Assembly convenes for its 2021 session on Wednesday (Jan. 13).

“We applaud the buses Fairfax has added, and we hope to add more through the state grant fund in the future,” Monacella said. “With every electric bus we add, we move the needle for our kids’ health and their future in the face of climate change.”