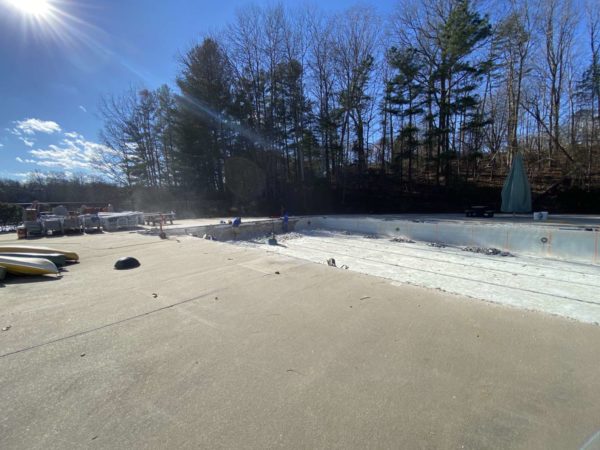 Lake Audubon Pool, operated by Reston Association, is in the midst of renovations. The pool is undergoing re-plastering, the pump and filter are being replaced, and other plumbing is being fixed.

Work began in mid-January and is expected to be completed sometime between mid-April and early May. But weather could delay the project, cautions Mike Leone of Reston Association.

This week work on the Lake Audubon Pool capital project began. This project will involve a full removal (pictured) and re-plaster of the pool, as well as replacing the pool pump, filter, and associated plumbing in totality. The project will be completed by mid to late April. pic.twitter.com/AO40Nul3Ps

This is all part of Reston Association’s regular maintenance plan and required for compliance under Fairfax County Health Department code. Plaster coatings have about an eight-to-ten- year service life, writes Leone in an email to Reston Now.

Another Reston Association pool, Lake Thoreau, is also expected to undergo renovations but a funding hang-up has caused delays. The Lake Thoreau Pool project could cost up to $3.5 million.

At this time, it remains unclear when Reston Association pools will open this summer. In 2020, four out of 15 pools opened in late June.

“RA does not have hard dates for the opening of any of our pools for the 2021 summer season,” wrote Leone. “We are planning to open as many facilities as we can this summer.”

As pool season inches closer, updates will be posted on the Reston Association website.