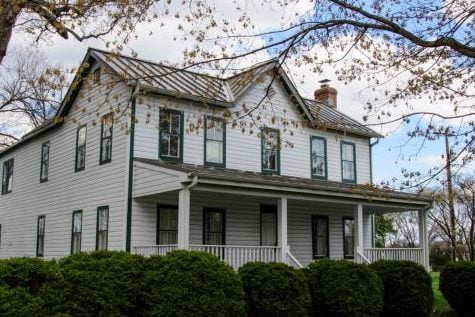 (Update 3/1/21) The public hearing  regarding leasing Frying Pan Farm Park’s Ellmore Farmhouse to ServiceSource will take now place on May 4 as opposed to March.

Earlier: Earlier this week, the Fairfax County Board of Supervisors approved a hearing in March to discuss allowing Fairfax County Park Authority to sublease the 130-year-old, two-story, 3,300 square foot house at 2739 West Ox Road to ServiceSource as part of the county’s “Resident Curator Program.”

The terms of the lease allows the organization to transform the house into a “Community Integration Center” that would provide employment to its clients through an onsite café and handicrafts specialty store.

ServiceSource has programs across the country including theirs in Northern Virginia for more than 40 years, according to its website.

It was back in July 2019 when ServiceSource was first identified as a candidate to take over Ellmore Farmhouse.

The sublease would be for 29 years.

The ServiceSource – the “resident curator” – has proposed rehabilitating “by making ADA-compliant improvements and incorporating green-building designs in a manner that respects the heritage, historic features and appearance of the property,” reads the board agenda.

Under the lease, the resident curator also agrees to provide ongoing maintenance and property upkeep for the next nearly three decades in exchange for rent-free use.

The Resident Curator Program is managed by the Fairfax County Park Authority (FCPA). There are four properties in the program: Lahey Lost Valley in Vienna, Ash Grove also in Vienna, Hannah P. Clark House in Lorton, and Ellmore Farmhouse in Herndon.

The house was first constructed in 1891 as a family home. William Ellmore, a prominent local politician who served on the Fairfax County Board of Supervisor, operated a dairy farm on the property as well until it was sold in 1945. It continued as a dairy farm for another decade before shutting down operations.

It went through several different owners, including a church, prior to being sold to FCPA.