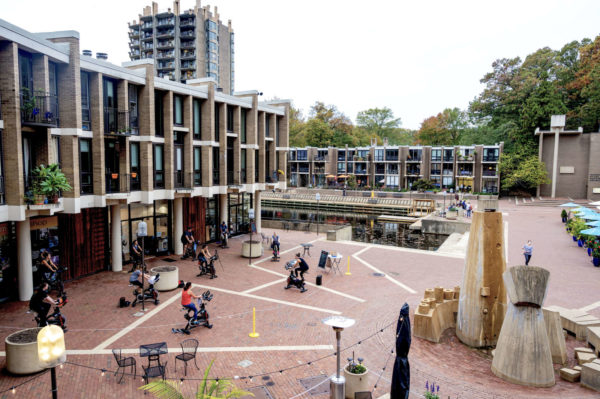 It was a year ago when business owner Liz Kamp made the decision to shut down her cycling, strength, and fitness studio New Trail.

New Trail, located at Lake Anne in Reston, was thriving after opening in November 2018. The customer base was growing, nine employees had been hired, and Kamp, 36 and a mother of three, was proud of the community she had built. There was even talk about opening a second studio.

That all changed on March 14 last year.

“We had a St. Paddy’s [cycling] event and I had set up a million safety precautions that I felt pretty good about,” Kamp says. “Then we had it and I just felt like I didn’t have full control of this.”

Immediately after that event, she made a very difficult decision.

Seeing people getting too close to one another after class and realizing she could do little to spread COVID-19 by establishing precautions, she closed New Trail.

“It was too stressful and too risky, ” she says. “It was my social responsibility to shut it down.”

Exactly a year later, on March 14, 2021, Kamp is re-opening her studio and allowing people to exercise indoors for the first time.

Classes will remain very limited, with only six people inside at a time and spread out by at least 10 feet. Doors will remain open for fresh air, a new HVAC system will be running, and masks are required.

Participants can also exercise outside for those who are not comfortable being inside yet.

But it’s a return to something resembling normalcy for the fitness studio and for Kamp’s ambitions. She hopes to create a space for those like her looking for a good workout.

Kamp has been a fitness instructor for nearly her whole career, including a stint as a fitness specialist for the Herndon Parks and Recreation Department.

Then, in 2009, she moved to Reston and within walking distance of Lake Anne.

“It was sort of an underutilized space at the time,” Kamp says about Lake Anne.

It took nearly a decade — she’s a mom to three kids —  but Kamp eventually made her dream happen — opening up New Trail in part of the space that used to be Lake Anne Pharmacy (which closed in 2014).

“Such a deep part of my mission is to create the space where it’s a hangout,” she says. “You’re not anonymous. They know me. I know them. That small town appeal was strong for me.”

Her goal was also to create a studio for folks like her.

“I think a lot of times when people see what we call boutique studios, it’s 20-year-old models teaching and it sort of sets people up for intimidation,” she says. “I wanted to take that all out of the game and focus on just creating a real community where the focus is not how we look, but working out and moving for wellness. Mind, body and soul.”

Everything was going great until March 2020. In the intervening year, she received a Payment Protection Program loan while pivoting to some outdoor (in the summer) and virtual classes but admits it wasn’t the same.

“Our value in the marketplace is the in-person experience, so when you take that away, it’s just different and it takes away our uniqueness,” she says.

Competing with Pelotons of the world was also very tough since they can provide top-notch production at lower costs.

“That was defeating at times… feeling like ‘how can I compete?'” Kamp says.

But this shift back to indoors and, maybe, normalcy is leaving her hopeful. She misses seeing her customers and thinks people will flock back.

“Places like New Trail are going to mean much more to people now,” she says. “We’ve missed that human connection.”

As for that second studio, she remains optimistic about it but is waiting to see what 2021 and beyond – brings.

“We will keep pushing our mission forward,” Kamp says.