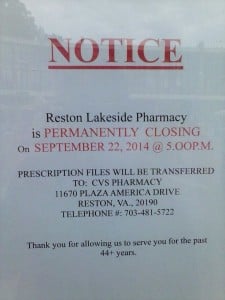 Lakeside Pharmacy, which has been operating at Lake Anne Plaza for 44 years, will shut its doors on Sept. 22.

The store was the last original store at Lake Anne. After being on and off the market for five years, the space was sold to an investor last spring. The deal closed in late May, with the hope that the store would remain in continuous operation. However, talks with a new, independent pharmacy failed to reach a deal.

Prescriptions on file at Lakeside Pharmacy will be transferred to the CVS at Plaza America, pharmacist and former owner Larry Cohn said.

Cafe Lakeside, the breakfast and lunch counter located in the pharmacy, closed in February. Owners Alfredo and Rocio Melendez, who had operated the space since 2011, said they wanted to retire since the future of the space was unknown.

The lunch counter space is being marketed for sale or lease separately, so a prospective tenant would not necessarily have to run the business inside another business.

The waterfront space that houses Lakeside Pharmacy is not slated for redevelopment as part of Lake Anne Development Partners’ (Republic Development) plan for the area.

Because the pharmacy is in the historic part of Lake Anne, it cannot undergo big changes. Nearby areas such as the current parking lot at Lake Anne Plaza, a grove of trees owned by Reston Association and Crescent Apartments are included in the plan, which includes 60,000 square feet of new retail space, up to 82,500 square feet of office space, and 1,037 residential units.

Meanwhile, other Lake Anne businesses are changing hands or have recently closed. Jasmine Cafe, a locally owned restaurant on the plaza, closed in April. The Lake Anne Coffee House is for sale. The Cupcake Ladi and New Family Naturals also recently closed.