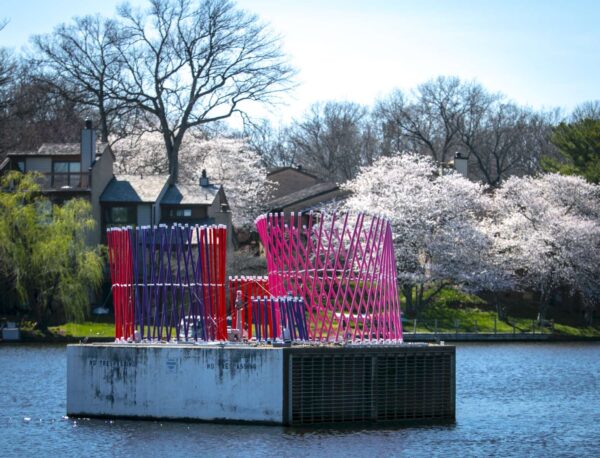 A new sculpture installed on Lake Thoreau late last month was designed and built by South Lake High School students, a tradition that dates back to 2014.

“Part and Parcel” was developed by about 20 students on the South Lakes High School STEAM (Science, technology, engineering, and mathematics) Team.

Made primarily from repurposed PVC piping from a previous Reston Station project, the sculpture’s design and name were envisioned as a metaphor for how each part of society is needed in order to create one that’s functioning and whole.

“I hope people are left with a sense of joy and hopefulness after seeing Part and Parcel,” Ann Ehrlich, a member of the STEAM team, wrote in an email to Reston Now. “We were able to present a lovely piece of art to the community during such a rough time and I hope they can see that even during difficult times, some beauty can arise.”

The sculpture sits on the Lake Thoreau spillway, turning a potential eyesore into a work of art.

“Part and Parcel transforms and activates an otherwise drab concrete platform into something unexpected and visually delightful, both during the day and when lit up at night,” Public Art Reston Program Coordinator Phoebe Avery told Reston Now. “This is what public art is all about.”

Public Art Reston is a longtime sponsor of the project.

This is the seventh sculpture designed and built by the students in the program, which was co-founded by South Lakes art teacher and local artist Marco Rando. The previous one, installed in summer 2019, was called “Spectrum” and was composed of five wooden interlocking prisms.

Rando says that, beyond putting beautiful art in the world, the program also teaches students how to collaborate, take feedback, defend their ideas, and navigate processes that can sometimes be difficult.

“The students see firsthand…the steps of [having] to defend their idea, who they have to defend it to, preparing for a presentation, explain how they’re going to go about building this, and logistics of everything,” Rando said. “They’re getting that professional experience at this wonderful age of learning. It’s shaped a lot of students.”

Team member David Raw agrees that this project provided a glimpse into the professional lives of artists and engineers.

“By working on Part and Parcel, I was given the opportunity to work hand and hand with real art and engineering professionals.,” he wrote to Reston Now. “From contacting material suppliers to assisting helpers put up the final piece on the spillway, I was exposed to the real working environment of professional art.”

Of course, the students had their fair share of challenges this year. The design was first conceived in the fall of 2019, prior to the pandemic, but it had to be tweaked due to public health restrictions. In-person group meetings were sporadic and had to be socially distant. The budget was also significantly lower than in previous years, Rando says.

All of this posed potential problems that the students had to overcome.

“We came into a huge issue with the integrity of the design,” Gwyneth Wagner, one of the students, said. “We had to completely rethink the design of the sculpture and it set us back until our later install date…[but] I think it was for the best because we are all really happy and proud of the sculpture now.”

Wagner’s teammates agree that the extra attention and collaboration paid off.

“Personally, the most rewarding aspect of designing and building this sculpture was being able to collaborate with others,” Sofia Pakhomkina said. “It is always so amazing to watch as a group turns a simple idea into a physical, tangible thing.”

Rando is proud of his students.

“It was perseverance, like I’ve never seen it before,” he says.

“Part and Parcel” is expected to be on display at Lake Thoreau at least through the end of the year.