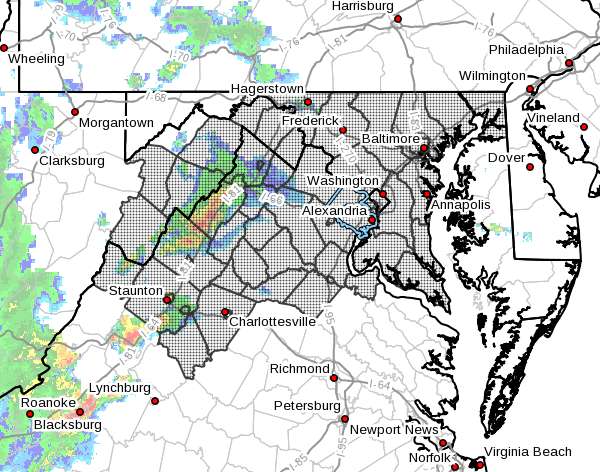 Updated at 4:10 p.m. — The National Weather Service has now upgraded Fairfax County to a Severe Thunderstorm Warning, advising people to move to an interior room on the lowest floor of a building.

In effect until 4:45 p.m., the warning was issued at 4:01 p.m. after a severe thunderstorm was spotted near Middleburg. The storm was reportedly moving east at 30 miles per hour.

Here is the full alert:

* At 400 PM EDT, a severe thunderstorm was located near Middleburg, or 8 miles west of Brambleton, moving east at 30 mph.

Earlier: Fairfax County is currently under a Severe Thunderstorm Watch, with scattered showers anticipated throughout the D.C. area this afternoon.

The alert will be in effect until 8 p.m. The National Weather Service says that a thunderstorm could potentially hit after 5 p.m.

“Some storms could be severe, with large hail and damaging winds,” the NWS forecast for Reston says.

With a 60% chance of precipitation, between a tenth and a quarter of an inch of rain could fall this afternoon, and another quarter to half inch could come in the evening.

[5/4/21 at 2:35 PM]⚠️Fairfax County is currently under a Severe Thunderstorm Watch ⛈️ until 8 PM
🚨Know your alerts: Watch (be prepared) vs. Warning (take action)
🏫Identify your safe place: inside, interior, no windows#VaWx #ReadyFairfax #BePrepared pic.twitter.com/ADS53eMd5E