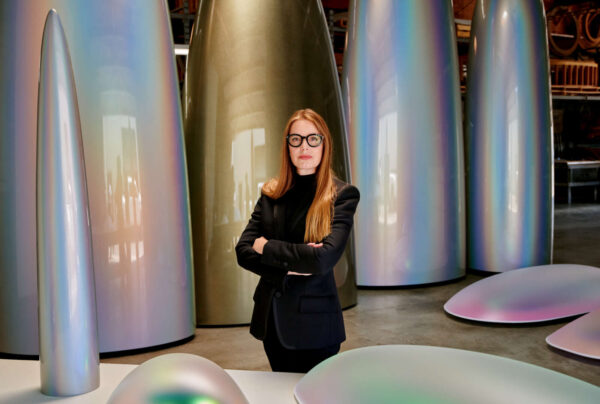 The Tephra Institute of Contemporary Art is expanding its reach to downtown D.C., where it is installing a sculpture by California artist Gisela Colón.

Titled “Parabolic Monolith Iridium,” the sculpture will be located at the top of James Monroe Park near the National Mall, and it will be on view starting this Saturday (May 8). It is Colón’s first public sculpture by  in the D.C. region.

“We’re thrilled to bring Gisela’s work to Washington,” Tephra ICA Executive Director and Curator Jaynelle Hazard said. “The Parabolic Monolith Iridium is an object that speaks to the future, to transformation, and especially to hope. It’s symbolism is very much aligned with how we aim to position ourselves and our perspective as an institution.”

Tephra, which was previously known as the Greater Reston Arts Center, is currently hosting Colón’s D.C.-area debut solo exhibit, which features acrylic and carbon-fiber artwork made using “advanced aerospace technology,” according to the institute’s website.

The Quantum Shift exhibition will remain on display at Tephra’s gallery in Reston (12001 Market St.) through May 29. In-person visits are limited to 30-minute appointments made in advance, but it can also be viewed through a virtual tour.

The monolith that will be on display in D.C. was part of the solo exhibit. A native of Puerto Rico who currently works and lives in Los Angeles, Colón says she wanted to explore the relationship between humans and the earth through her sculptures.

“While their outward appearance is high-tech, space-age, and futuristic, [my Monoliths] are also visceral, primitive, and reminiscent of ancient cultural artifacts,” Colón said.

The “Parabolic Monolith Iridium” project is being sponsored by Leidos and the civil engineering firm Charles P. Johnson & Associates. Tephra partnered with the Golden Triangle Business Improvement District on the display.

As part of its sponsorship, Leidos has committed to making a donation to the Puerto Rican nonprofit Hogares Teresa Toda, which provides shelter, education, and other supports to adolescent girls.

“As a leading science and technology company, creativity drives our pursuit of knowledge and solving problems for our customers,” Leidos Senior Vice President Melissa Lee Dueñas said. “We are excited to team up with Ms. Colón on this new exhibit and we look forward to partnering with her to help empower girls and young people in Puerto Rico.”