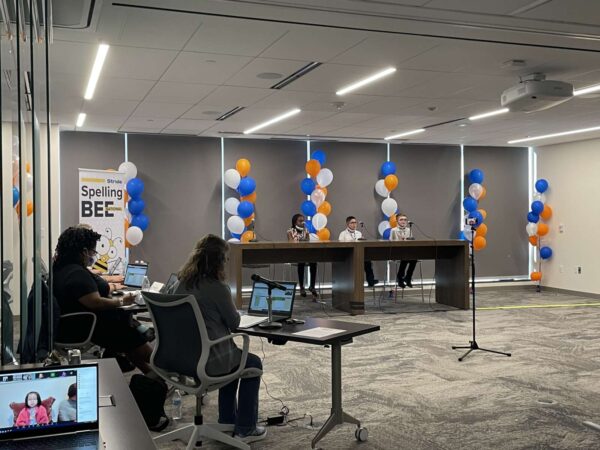 After months of virtual classes necessitated by the COVID-19 pandemic, a consensus emerged in Fairfax County that in-person learning is the ideal approach for students, but for the thousands of students who attend Stride Inc.‘s kindergarten-to-12th-grade schools, online classes are the norm, rather than the exception.

Stride says it has provided virtual learning to more than 2 million people since launching as K12 Inc. in 2000, but last Tuesday (May 18) represented a first for the Herndon-based company, as a dozen students and their families gathered at its corporate headquarters for the first-ever K12 National Spelling Bee.

“Spelling bees are a rite of passage for students everywhere, but it’s never been done online at this scale,” Stride CEO James Rhyu said in a statement.

The competition featured 12 students from nine states, including Virginia, who advanced to the finals after winning contests within their schools and regions. There were four finalists each at the elementary, middle, and high school levels, all of them from Stride’s online public school program.

Stride schools regularly offer activities and events for students to interact with classmates in person, including student clubs, field trips, and extracurricular activities, but the spelling bee championship gave students a chance to meet peers from around the country, Director of Corporate Communications Emily Riordan says.

“We are always looking for new ways to provide students with experiences that further enrich their academic pursuits, to give them space to demonstrate what they know, and to connect with each other,” she told Reston Now. “…The National Spelling Bee is one way we’re bringing together students from different schools, but who share the experience of attending public school online.”

Students at the event were required to wear face masks for its entirety, and they completed health screenings prior to arriving, according to a press release from Stride.

However, some students still attended virtually instead of traveling to Herndon, including Washington Virtual Academy (WAVA) third grader Ilyannie Gonzalez, who participated remotely from the other side of the country.

Ilyannie ultimately won the elementary school-level championship, beating out three other students who were attending in person after 18 rounds.

“Competing in the Spelling Bee is a dream come true for me,” she said before the competition started. “I love the challenge, and I am able to expand my vocabulary by learning words that are new to me. Most importantly, I would be making my family and my WAVA community proud.”

Like many other online education providers, Stride reported an increased demand for its services during the pandemic.

In addition to hiring more than 1,300 teachers for the 2020-2021 school year, Stride rebranded in November to reflect its efforts to branch out into adult education and acquired two businesses with the goal of expanding its technology and healthcare career training offerings.

The past year hasn’t been entirely positive for Stride. According to NPR, the company was fired by Miami-Dade County Public Schools in Florida after technical issues led to a disastrous launch of the district’s virtual learning platform, and online charter schools in general have drawn criticism for students’ performance and a for-profit business model funded by taxpayer money, rather than tuition.

Still, Stride believes the past year has shown that virtual schools can be viable option for students looking for more flexibility than traditional public schools, and the National Spelling Bee suggests social interactions don’t have to be sacrificed in the process.

“Unlike a lot of their brick-and-mortar peers this past year, learning in an online setting is not new for these students, and neither is the opportunity to connect with their classmates and show off what they’ve learned to family and friends,” Rhyu said. “We’re proud of each of the Spelling Bee finalists, and we’re excited to celebrate with them here in Herndon.”