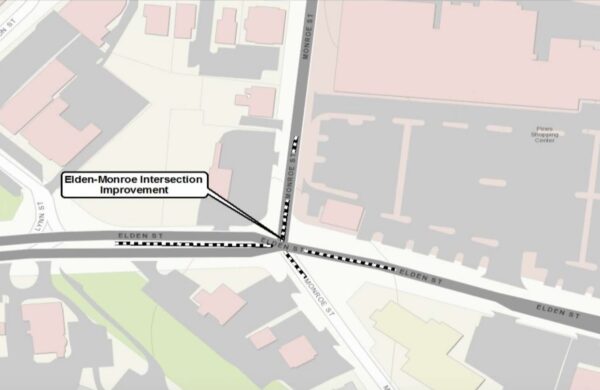 Herndon is moving forward with another capital improvement project.

The Herndon Town Council voted 6-0 on Tuesday (May 25), with Vice Mayor Cesar del Aguila absent, to award a contract to the Ashburn Construction Corporation for the Elden Street and Monroe Street Intersection Improvement Project.

The intersection project is similar to other projects in the town’s Capital Improvement Program in that it will include brick crosswalks and sidewalks as well as ADA compliant curb ramps. The project will also bring a new traffic signal and storm drainage improvements.

Ashburn Construction Corporation beat out one other bidder to win the $1.1 million contract.

Half of the funding for the construction costs is available for reimbursement through revenue-sharing funds collected from the Northern Virginia Transportation Authority. The NVTA funds come from the 30% local distribution revenue given to localities for transportation projects through House Bill 2313, which was passed in 2013.

According to the Town of Herndon’s Fiscal Year 2021-2026 CIP, this project will link the East Elden Project, the Downtown Streetscape Project, and the Elden-Monroe private development project, a reference to the now-completed Junction Square mixed-use development.

The East Elden Project is being designed and constructed by the Virginia Department of Transportation, which plans to widen Elden Street into a six-lane divided section between Herndon and Fairfax County parkways and a four-lane section from Herndon Parkway to Van Buren Street. The project will also include streetscape and median enhancements.

The Elden/Monroe project will provide a transition when the street narrows down to two travel lanes west of Van Buren Street and approaching Monroe Street, according to the CIP.

The Downtown Streetscape project entails widening and enhancing streetscapes with brick sidewalks, grated tree wells and other features. Construction on the project’s third phase is expected to begin this year for an anticipated completion in 2022.