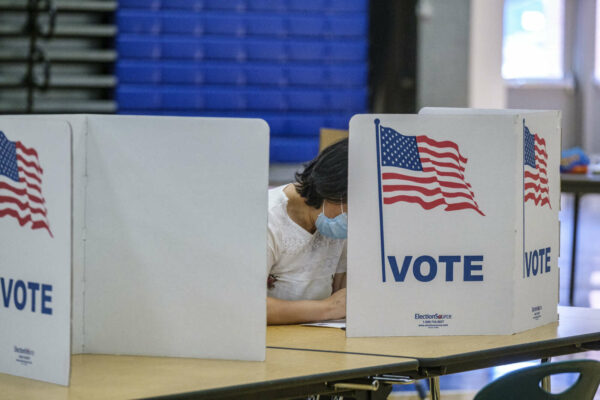 (Updated at 11:10 p.m.) Del. Ken Plum easily defeated his first primary opponent in more than two decades today (Tuesday), earning 75% of the vote, according to the Virginia Department of Elections’ unofficial results.

Plum has served as delegate for Virginia’s 34th House District, which encompasses Reston, since 1982, but he faced a rare Democratic challenger this year in data analyst and political newcomer Mary Barthelson, who announced her candidacy in March.

Plum will now face his first Republican challenger since 2011 in November’s general election, when he will vie for the seat with veteran and security consultant Matt Lang.

Herndon voters got a more competitive primary, as challenger Irene Shin eked out a victory in the 86th House District race over incumbent Del. Ibraheem Samirah, who was seeking his second full term in office.

After Fairfax County took a while to count absentee ballots, all 17 precincts were finally reported just after 11 a.m. Shin received 3,415 votes — or 51.7% — while Samirah got 3,185, or 48.3%, making the race the closest of the night that resulted in an incumbent defeat.

McAuliffe will compete in November’s general election against businessman Glenn Youngkin, who won the Republican gubernatorial nomination in an “unassembled” convention in May.

The Democratic ticket will be completed by Del. Hala Ayala (D-51st District), who beat six other candidates to snag the lieutenant governor nomination, and Attorney General Mark Herring, who bested challenger Jay Jones as he seeks a third consecutive term in the position.

In its unofficial returns, the Fairfax County Office of Elections reported a voter turnout of 11.1%, a relatively low rate that’s not especially unusual for an off-year primary. The 2017 Democratic primary, the last year with a gubernatorial race on the ballot, saw a 13.4% turnout.

According to the county, 21,493 voters — 2.9% of the electorate — cast absentee ballots either by mail or in-person, while 60,999 people went to the polls on the day of the primary. In comparison, the 2017 Democratic primary saw just 7,105 absentee voters compared to 86,931 primary day voters.