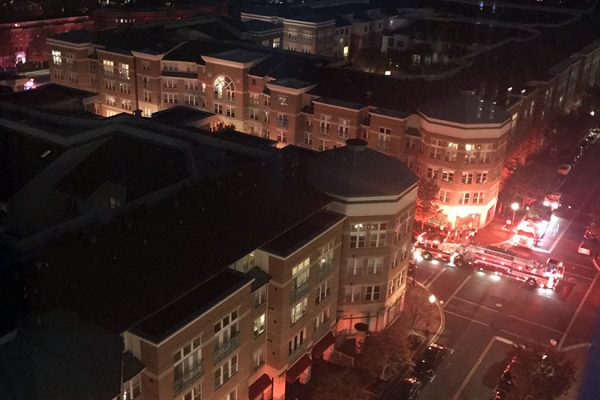 (Updated at 3 p.m.) An accidental fire erupted in the kitchen of a Reston condo with someone and a cat inside last night, causing about $180,000 in damage and displacing locals, according to the Fairfax County Fire & Rescue Department.

About 40 firefighters rushed to the unit in a four-story building on the 12000 block of Market Street about 6:30 p.m. Tuesday.

Firefighters used a 35-foot ladder to climb up to the condo’s occupant and calm the individual as the person waited for help on a balcony. They eventually helped the occupant walk through the building and get into an ambulance, which brought the individual to a local hospital for evaluation.

At some point, the person’s cat went missing, but was later found.

A single sprinkler head was able to extinguish the fire, which came from an oven.

Five residents were displaced due to the blaze. Six condo units were damaged.