Birthday bash for Mark Twain — Reston Regional Library will celebrate from 7 p.m. to 8:30 p.m. the famous American humorist, who died in 1910 and would have been 183 years old on Nov. 30. [Fairfax County]

Senior movie day — The Reston Association’s “Meet Me at the Movies” will screen “Won’t You Be My Neighbor?” — the 2018 documentary about Fred Rogers — at 10 a.m. with free refreshments. Tickets are free for people age 55 and older. The monthly movie event is done in cooperation with the Bow-Tie Cinemas at Reston Town Center and is sponsored by Tall Oaks Assisted Living. [Reston Association] 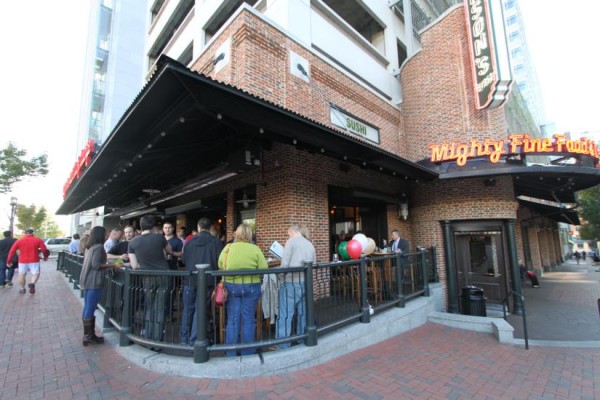 A lawsuit by a Reston Town Center retailer against Boston Properties in response to the developer’s paid parking system has been settled.

Under the agreement, customers of Jackson’s Mighty Fine Food & Lucky Lounge will be offered a special parking arrangement. Guests will be able to enter their license plate number into one of the pay stations in the Orange Garage or on a tablet inside Jackson’s to validate parking.

“Both parties look forward to continuing their 10-year relationship at Reston Town Center,” according to a statement published by the company.

The terms of the deal were not immediately disclosed. A representative for Boston Properties declined to comment further on the deal or release any details.

A number of other restaurants have cited the paid parking system as cause for leaving Reston Town Center in recent months.

We’re counting down the top 20 most-read articles of 2017 this week. Here’s the final list of our top five stories.

5. The first lawsuit filed regarding Boston Properties’ paid parking system at Reston Town Center in late March had 10,970 views. The suit was initiated by Jackson’s Mighty Fine Food and Lucky Lounge (11927 Democracy Drive). Paid parking continues to challenge local businesses, according to several tenants. Just this week, Appalachian Spring, one of the first tenants of Reston Town Center, announced plans to shutter its Reston location partly due to limited foot traffic that a business representative believes decreased partly due to paid parking.

4. Continuing a similar theme, Boston Properties’ plans to modify its parking system five months after instituting paid parking drew 11,078 views. The company rescinded the payment requirements for users of RTC parking garages after 5 p.m. and also allow one hour of free garage parking for sessions that begin before 5 p.m.

3. An article about where to watch one of the most anticipated professional fights in history gained 14,374 page views. Undefeated box champion Floyd Mayweather went toe to toe with UFC superstar Conor McGregor.

2. The brutal killing of Nabra Hassanen, a 17-year-old Muslim girl who was killed as she walked to her mosque after night prayers during the month of fasting gained nationwide attention and sent reverberations locally. Darwin Martin-Torres, a 22-year-old, is accused of raping and sexual assaulting Hassanen. Prosecutors are seeking the death penalty. The article gained 15,575 views.

1. A rundown of where to spot Fourth of July fireworks took the top honors of the year with more than 16,000 page views. Turns out finding places to complete the American tradition was especially popular among readers.

It’s been quite a year and we look forward to bring you more stories in 2018.