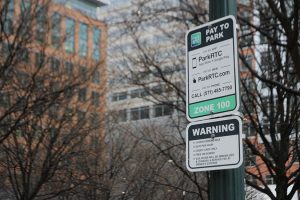 (Updated 11:35 a.m. with more information from lawsuit and link to view document; updated 4:30 p.m. with statement on behalf of Boston Properties)

The first lawsuit regarding Boston Properties’ paid parking system at Reston Town Center has been filed.

Representatives of Town Center businesses have been meeting among themselves to discuss their options since paid parking began, and the threat of potential legal action was first made public in early February.

The suit by Jackson’s (view) was filed Wednesday afternoon in the Circuit Court of Fairfax County. In addition to the injunction, the restaurant seeks “an award of damages of $500,000 or other specific amount to be established at trial.”

According to the lawsuit, Jackson’s says it negotiated lease terms preventing Boston Properties from implementing parking controls that “unduly impede” guests and requiring Boston Properties to assure that any paid parking system must allow Jackson’s to validate parking — at no expense to the restaurant — for guests and employees. The lawsuit claims the validation system imposed by BXP violates the restaurant’s lease rights and the requirements it sought.

“Our team has been inundated with complaints from guests who tell us that the process to use the validation system is cumbersome and confusing,” said Orson Williams, managing partner at Jackson’s, in the announcement. “On top of that, Boston Properties’ parking attendants often give incorrect and misleading instructions when our guests seek help in getting unlimited free parking.”

Jackson’s, operated by Great American Restaurants, opened in the Town Center in 2008.

Restaurants and other businesses within the Town Center have claimed major decreases in business since the paid parking system went into place. An organized protest that took place earlier this month saw hundreds of participants from throughout the community.

Boston Properties has said the impact of paid parking on Town Center business has been “far less” than claimed.

“We did not want to have to sue and we tried to work with Boston Properties to address our concerns and our rights under the lease to give our customers free and hassle-free parking, both before and after Boston Properties implemented this parking system. But they were uncompromising and appeared disinterested in working with us to provide our guests a better experience at Reston Town Center,” said Jon Norton, CEO of Great American Restaurants, in the announcement. “It appears to us that they are focused on maximizing revenue instead of honoring the spirit and terms of our lease, and seem unconcerned with the impact their system has had on the Town Center. It is disappointing that they have spent so much time bolstering a PR campaign rather than working with us to fulfill their lease obligations.”

Spokesperson Kathy Walsh of the Fallston Group, speaking on behalf of Boston Properties, said it “would be inappropriate to discuss pending litigation, particularly as there is a confidentiality provision that prevents either party from discussing many of the lease terms.”