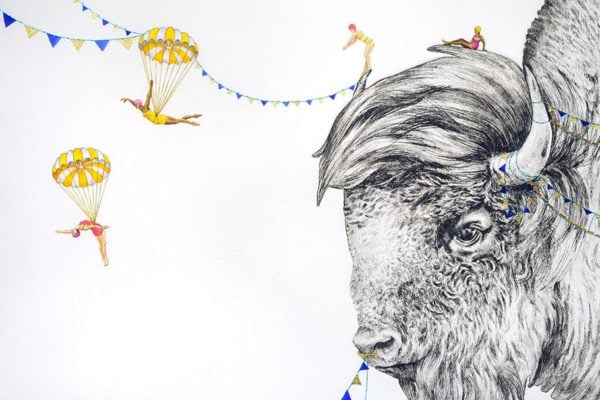 A new art exhibit titled “Fleeting Moments” is officially on display at the Signature apartment’s satellite art gallery for Tephra Institute of Contemporary Art through April 20.

The exhibit features the work of DC-based artist Amanda Outcalt. A multimedia artist who was born in North Carolina in 1985, Outcalt explores the social and psychological connections to momentary experiences.

The institute, which rebranded itself from its previous identity of the Greater Reston Arts Center, issued the following statement about the exhibit:

Outcalt’s intensive process of combining intaglio printmaking and the embellishment of works on paper results in a narrative that appears playful at the outset but carries significant weight. Large, unwieldy mammals, including bears, bison, camels, elephants, and walruses are seen positioned on precarious objects, such as circus balls and ice floes while adorned in party hats and tethered to jewel-hued balloons. Outcalt’s visual vocabulary and diverse use of media reflect emotions, such as anxiety, contentment, and longing paired with optimism, growth, and an eagerness for a return to normal during this extraordinary moment.

Her work is inspired by personal struggles with natural pregnancy loss and infertility, as well as challenges associated with memory recall.

“Outcalt’s distinctive compositions and diverse use of media reflect optimism, growth, and an eagerness to return to normal during this extraordinary moment,” according to TICA.

Because of the COVID-19 pandemic, access to the satellite gallery is only permitted for Signature residents only. However, a virtual artist talk with Outcalt is planned for Feb. 11 at 6 p.m. Participants should registry by emailing [email protected] for Zoom link and password. The event is sponsored by Reston Community Community Center. 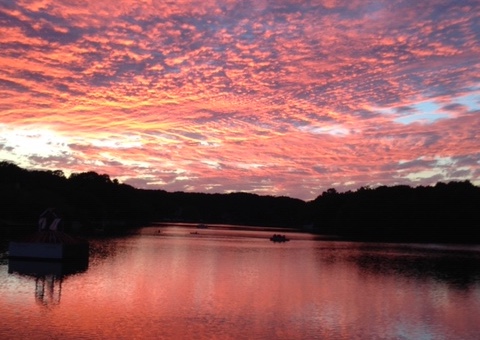 Wireless Service Available in Two-Thirds of Metro Tunnels –“Metro and the nation’s leading wireless carriers, AT&T, Sprint, T-Mobile and Verizon Wireless announce that as of today approximately two-thirds of Metro’s tunnels are now wired for cellular and data service. This marks the near completion of underground wireless service in Virginia, with the addition of the newest tunnel segments on the Yellow and Blue lines that are “wireless ready.” [Washington Metropolitan Area Transit Authority] 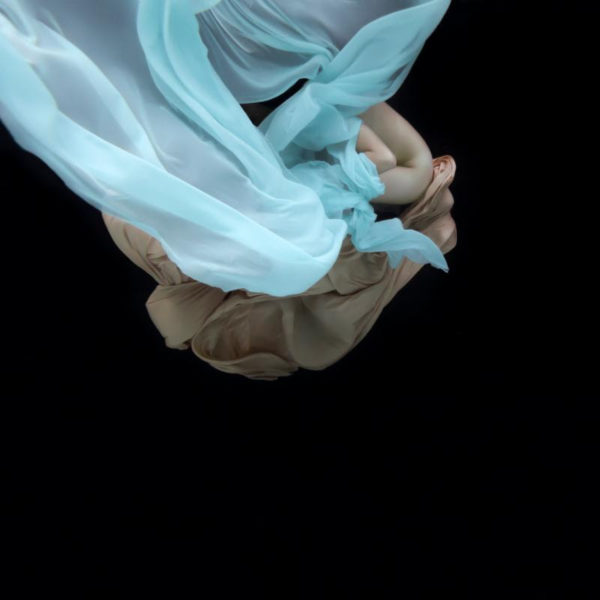 A new body of work will be on display at the Greater Reston Art Center’s satellite gallery at Signature (11850 Freedom Drive), the new residential building in Reston Town Center.

Virginia-based photographer Rahshia Sawyer‘s newest work, “What I Haven’t Told You,” that depicts figures floating in water and draped in gossamer silks.

GRACE issued the following description about the exhibit, which opens tomorrow (Sept. 28) and ends on Jan. 8.:

…the artist endeavors to illustrate the tension between emotions expressed and emotions repressed.Sawyer received her MFA from George Mason University. Her work has been exhibited both nationally and internationally and she was included in the 2012 Inaugural Dublin Biennial.

She was the 2012 recipient of the Contemporary Talents Award from France’s François Schneider Foundation and received a 2016 Honorable Mention from the International Photography Awards and Prix de la Photographie (Px3). Her work is in the permanent collections of the Corcoran Gallery of Art, François Schneider Foundation, and Radford University Museum.

The exhibit is free and open to the public. It is open from Tuesday through Saturday from 11 a.m. to 5 p.m. A reception for the artist is set for Oct. 25 from 6-8 p.m.

A new exhibition is coming to Greater Reston Arts Center at Signature apartments this weekend. Susan Hostetler, a DC-based artist, will feature her work “Volatile,” which is inspired by avian life, songbird vocalizations and flight patterns.

The exhibition will be open from 11 a.m. to 5 p.m. Tuesday through Saturday from Friday (June 8) through September 18.

Hostetler uses mixed media to create delicate works, including graphite drawings with collage on mylar. She uses hand-cut stencils of bird shapes, which she places onto mylar and colors over with graphite sticks in a variety of textures and repeating patterns.

She also created hand-shaped clay birds that are attached to acrylic posts, creating “a coordinate of flight that carries through the linear atrium space,” according to organizers.

Hostetler received her Masters of Art in Teaching from the Corcoran School of the Arts. In 2013, she received the Robert Rauschenberg Award for Art Education.

The satellite gallery includes year-round exhibitions by local artists. It is part of a partnership between Boston Properties, Bozzuto Management and GRACE. Exhibitions are free and open to the public. 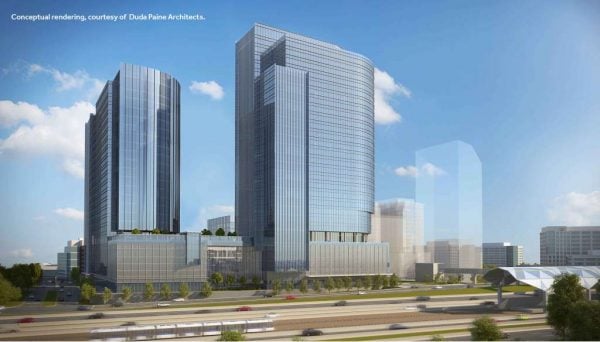 The new mixed use project is designed to complement “the amenity base and community environment of the highly successful Reston Town Center,” Thomas said.

BXP President Doug Linde said he was pleased by the strength of Reston Town Center, which he called “a magnet for private sector contractors and technology tenants.”

The company opened the Signature, a residential high-rise in Reston Town Center, in January.

Overall, the real estate investment trust reported an income of $176 million, up from $97 million this time last year.

A spiraling tower of glass created by American glass artist Danny Lane is under construction next to the newly-opened Signature, Boston Properties’ 508-unit apartment building.

The artwork consists of stacked, iron glass on a granite plinth that can also be used as seating. The twisting form is placed at the center of the convergence point between three pedestrian paths.

The art piece is the “focal point” within Signature Park, which contains widened bike path, a play area for children and stairs leading to town center, according to Richard Ellis, Boston Properties’ vice president of development.

The site is under construction as work on landscaping continues, according Anne Delaney, executive director of Public Art Reston.

Here’s more about the piece and the artist from Public Art Reston:

The goal of the artwork is three fold. From macro to micro, our objective for the new Danny Lane sculpture site is: to enrich the civic life of greater Reston; to contribute a permanent sculpture to the Reston Town Center development that introduces a unique and elevating experience and to specifically form a connection between the new Signature residential tower that both harmonizes with the building’s elegant design and serves as a welcoming transition from the adjacent public green space.

Danny Lane is an American glass artist currently living and working in London. He is best known for his large scale glass and steel sculptures. Through his work, he contrasts the seeming fragility of glass as a material with the sturdiness of steel to create sculptures that are at once commanding and elegant. His work can be found in collections around the world, from London, to Hong Kong, to the United States. 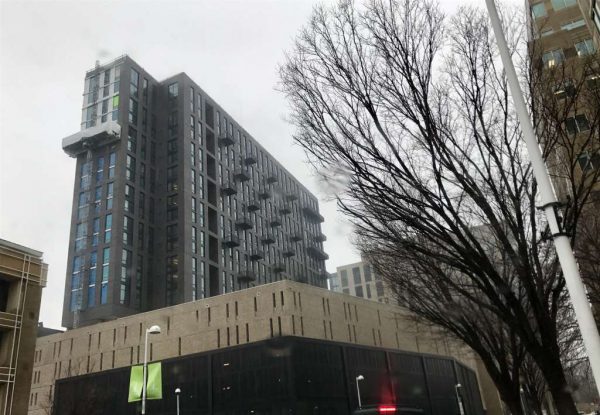 The Signature, a new 508-unit apartment building in the heart of Reston Town Center, will welcome a new retail tenant this year.

Balducci’s Food Lover’s Market, a gourmet market that says it offers restaurant-quality foods, imported cheeses and meats roasted in the Old Tradition, is set to open in the spring.

For Balducci’s, the new location at 11850 Freedom Drive is a homecoming. The store’s previous site in The Spectrum, just down the street from the current location, closed in 2005.

Construction crews are currently working on the site. An exact date on the store’s opening hasn’t been set yet, according to a company representative. Balducci’s has six other stores in Maryland, Virginia, New York and Connecticut.

The store is hiring for all positions. To apply, email [email protected]. 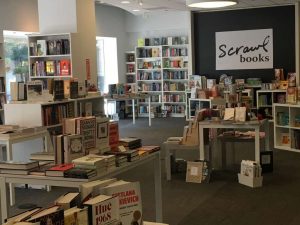 Scrawl Books, an independent store that opened in late 2015, is turning a page next month.

The store is moving from its pop-up location on 11862 Market Street to 11911 Freedom Drive in mid-February as the building undergoes renovations this year.

The future site is currently being used as the leasing office for the Signature apartments, a 508-unit residential project with nine levels of underground parking.

“It is a perfect space for Scrawl Books, with room for browsing and our full schedule of author readings, book clubs, and story times,” said Rachel Wood, the bookstore’s owner.

Since November 2016, the bookstore had a pop-up shop on Market Street shared with Truffle Shots and Ella Rue. Over the last year, Scrawl Books sprawled over the entire store, according to Wood.

A grand opening and ribbon cutting is scheduled for Feb. 18.  As the move takes place, the store is open at Urban Pop at Reston Station on weekdays from 4-8 p.m. and on Sundays at ArtInsights (11921 Freedom Drive). Books can also be purchased online.