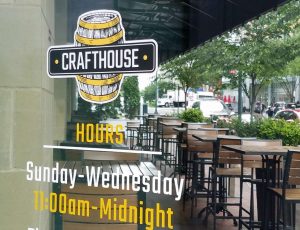 Florida-based World of Beer is suing Evan Matz, the former local franchisee who rebranded his restaurants earlier this month, saying he violated terms of the franchise agreement.

The Tampa Bay Business Journal reports that World of Beer alleges Matz in 2016 “refused to use the services, supplies, ingredients, food and beverage products required by WOBF under the franchise agreements” for his three locations, including at 1888 Explorer St. in Reston Town Center. Matz is now operating his three restaurants — the others are in Fairfax and Ballston — under the name Crafthouse.

In the suit, World of Beer says it sent Matz a formal notice in January telling him he was in default of the franchise agreement. At that time, records show, Matz brought up the fact that World of Beer had opened a restaurant at One Loudoun in March 2016 that was hurting his business in Reston.

“World of Beer Franchise gave permission for the WOB Ashburn to open just eight miles from WOB Reston which WOBF knew that this would cause harm/cannibalization to WOB Reston,” Matz’s told the company in a letter, the TBBJ reports. “This is still an ongoing issue and our number dropped 15 percent to 20 percent because of WOB Ashburn opening.”

The franchise agreement was terminated in February.

According to the suit, World of Beer says it “never consented to Matz’s proposal to rebrand and that it never reached an agreement to amend his post-termination obligations under the franchise agreement.” It is seeking, the TBBJ reports, “an order blocking Matz and Crafthouse from using WOBF marks and logos, using its confidential information, recruiting WOBF employee[s], diverting WOBF customers or engaging in any competitive business from operating in non-compete areas.”

The suit was filed last week in the U.S. District Court’s Middle District of Florida.

The Sarasota Herald-Tribune reports World of Beer filed a similar suit earlier this year against a restaurant there that recently left the franchise and rebranded.

Matz told the Washington Business Journal last week that his decision to leave the W0B franchise was due to the fact that he had been “‘butting heads’ with the company’s corporate office over ‘operational differences.'”

Following his own vision, Evan Matz has transformed his three World of Beer locations — including the one at Reston Town Center.

The large “World of Beer” signage has been removed from the Reston Town Center restaurant (1888 Explorer St.) as Matz has left the chain and rebranded the location, as well as his former WoB franchises in Arlington and Fairfax, into a new concept he says is designed to bring the community together.

Now known as Crafthouse, the restaurants are offering a full menu of American craft fare and a drink menu that Matz says supports local breweries, bourbons, whiskey, wine and spirits. According to a press release announcing the rebranding, the mission of the new restaurant is “Drink Local, Eat Local, Support Local.”

“After collecting feedback from our customers about their ideal restaurant experience, I’m confident that the local Arlington, Reston and Fairfax communities will embrace Crafthouse and will appreciate the changes we’re making,” Matz said in the release. “After more than five years, we have learned a lot from our loyal customers who want more than a pretzel and beer.”

Matz opened his World of Beer restaurant in Reston Town Center in June 2014.

The new menu at Crafthouse includes build-your-own burgers, tacos and flatbread pizza, along with a selection of appetizers, sandwiches, entrees and more. For more information about Crafthouse, visit its website or follow it on Facebook. 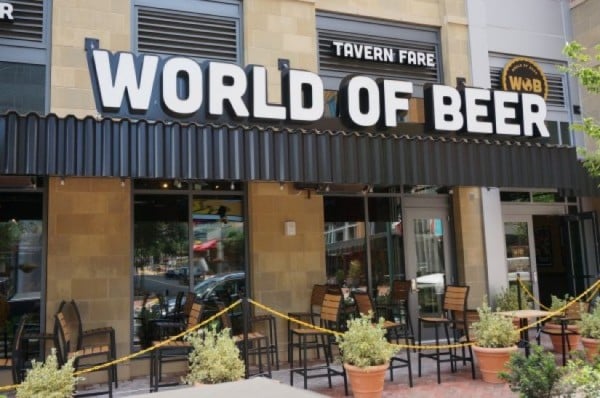 World of Beer is conducting a nationwide search for beer enthusiasts to take part in unique summer internship program.

The “Drink it Intern” program search kicks off nationwide on March 1 — and Reston’s World Of Beer will be the first place to hold in-person interviews.
The Reston in-tavern interviews interview will take place Wednesday, March 2 from at 4:30 p.m. until 7:00 p.m.

Candidates will be interviewed live on the WOB stage and judged by a panel including:

World of Beer says interns will be paid to spend the summer traveling to breweries, talking to brewmasters, attending festivals and going abroad to try exclusive beers and have craft beer experiences unlike ever before. It’s a paid gig, but it is part-time, so interns can also have another job of internship, WOB says.

Here is what WOB says it is looking for:

Candidates should be ready to show us their true personality, wow us with their social media and creative prowess, impress us with their passion for beer and food, and own the stage in front of our panelists. We’re looking for social media gurus, aspiring photographers, wanderlust souls, published writers, everyday beer enthusiasts or those who simply always have their phone ready to capture awesome moments. For more information visit World of Beer’s website.

World of Beer opened its doors at 1888 Explorer St. at Reston Town Center on Monday.

This is the second Virginia location for the Florida-based franchise, which also has a store in Arlington.

The 4,500-square-foot space in the ground floor of The Avant apartments features a rotating selection of hundreds of beers from around the world. There are also other spirits, a food menu and flat screen TVs broadcasting sports.