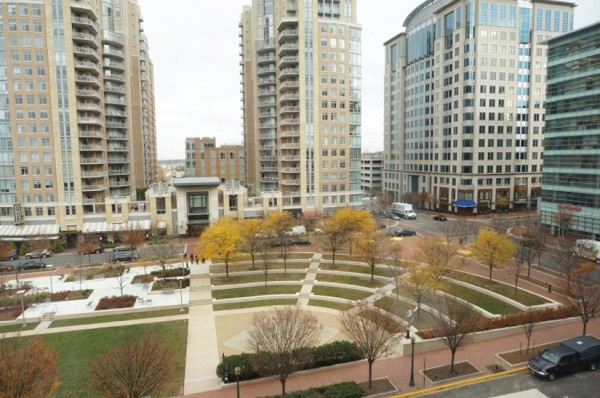 The opening of Metro’s Silver Line will transform the Tysons Corner and Reston areas into transit-oriented edge cities in the decades to come, says a report from real estate services firm Cushman & Wakefield.

The report, “The Silver Line: Envisioning a New Tysons Corner”  explores the Silver Line’s impact on the demographics, development and the overall real estate market. While it mainly concentrates on Tysons Corner, the Reston is expected to see a similar transformation.

“It’s an exciting time to be in Tysons – while the transformation of a suburban, automobile-centric office market into a more urban, walkable ‘urban’ center will take some time, it will happen,” said Paula Munger, C&W’s research managing director in the Mid-Atlantic and Southeast. “The trend towards 24/7 live-work-play environments is playing out in office markets globally, and the Silver Line will stimulate it in our region.”

Phase I of the $3.2 billion Silver Line will run from East Falls Church to Reston’s Wiehle Avenue. While originally estimated to open this month, there have been several testing delays and the project will open sometime in early 2014. Metro officials have not given a firm date. Phase 2 will run from Wiehle-Reston East to Dulles International Airport and into Ashburn. Phase 2 stations are not yet under construction will not open until at least 2018.

Cushman & Wakefield says the opening of Northern Virginia’s first new Metro stations in more than 15 years will make Tysons  — and in essence Reston — a more attractive place for Washington’s workforce, who can now more easily commute (or reverse-commute) from Washington, D.C., or Arlington.

The report uses the Rosslyn-Ballston area of Arlington as a hint of what might be to come.

The R-B Corridor also experienced a significant boom in residential housing units after the introduction of the Metro. Prior to the Metro’s opening, the entire RB Corridor contained 23 multi-family projects with over 100 units. Combined, these developments totaled about 6,000 units. Today, there are 74 such projects totaling just under 200,000 units.

That’s what groups like Reston Citizens Association’s Reston 2020 are envisioning too. But where commercial real estate firms see a gold rush, Reston 2020 sees frustrated residents and traffic jams. The group estimates the Wiehle station alone will bring 13,000 additional jobs and 5,500 new residential households by 2030-2040, causing clogged streets unless some big changes are made.

Reston 2020 recently gave the proposed changes to the Reston Master Plan — which will be voted on by the Fairfax County Planning Commission in January — an overall letter grade of D when it comes to planning for the changes in population and workers.

Meanwhile, Cushman & Wakefield says that despite an overall slowdown in investment sales for Northern Virginia, the Silver Line expansion has drawn high notice from investors.  Since 2010, $1.2 billion in investor office transactions have been in the vicinity of Phase I stations.

“The proposed apartments should be able to command top dollar as a result of their proximity to the stations, retail centers, luxury amenities and the overall higher income of the area,” the report says. “This may spur investors to upgrade recently purchased properties to match the offerings of future new construction.”

One of those new buildings, The Avant at Reston Town Center, which will be in walking distance to the Phase 2 Reston Parkway Silver Line station, recently opened with high-end amenities and high-end prices. Rents for a one bedroom start at more than $2,000 a month.