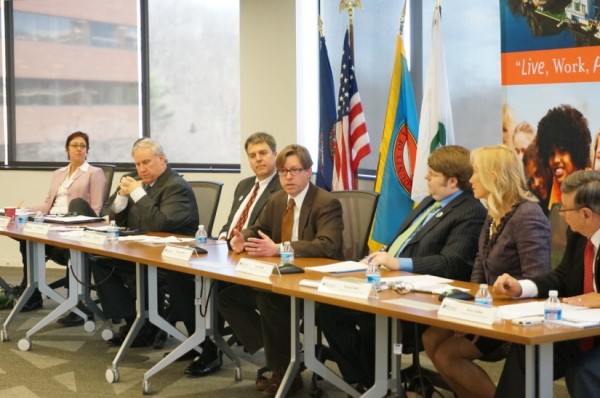 Reston’s future was very much on the mind of the candidates for the 2014 Reston Association Board of Directors at a candidates forum at RA Headquarters on Saturday.

With Metro’s Silver Line expected to open in Reston this year — bringing with it associated development expected to vastly increase jobs, residents, workers and traffic — the theme seemed to be this: how can Reston Association best serve the residents while also sticking to the founding principles that have made Reston a desirable place for the last 50 years?

“The challenges we face will certainly be different than those in the past,” said Andy Sigle, the RA At-large director and vice president who is running against four opponents for a second term.

Voting is currently open and will run through the end of March. The election results will be announced April 8.

“Development is threatening our way of life,” he said. “The Reston motto is ‘Live, work, play.’ We need to be vigilant as citizens. Not at the kids table, but at the adults table, when decisions are made.”

Even though there are eight candidates running for three seats, all of them seem to be in agreement about the the fundamental issues.

Among the questions asked: Future planning, community leadership and engagement, technology and communications have all beed identified as top priorities in the Reston Association Strategic Plan. What actions do you believe the association needs to undertake in the next 12 months?

Mason Miller, a web developer also running for the three-year At-large seat, said an improved RA website could be an excellent tool in engaging members, perhaps to talk to one another on forums or to enhance cluster communications.

“Maybe it is not just about paying your bill online,” he said.

Jeff Thomas, running for the same At-large seat, pointed out that since Fairfax County recently approved the changes to the Reston Master Plan, “the big decisions have already been made. We need to develop a process in which we engage with county staff and elected officials. Reston needs to have a clear voice what our desires and aspirations are.”

All candidates said they wanted to see open space preserved in Reston. That issue came up several times, with questions about a proposed indoor recreation center at Baron Cameron Park and also about a recent land swap at Lake Anne in order to build more parking.

“‘[The land swap] was the first time I ever remember RA ever giving away land to support a commercial venture,” said Jerry Volloy, a former RA CEO running for the one-year At-large seat. “Once you start doing that, that is going to raise concern with members about what comes next? Have to be very careful how we do that.

Lucinda Shannon (running unopposed for the three-year Hunters Woods/Dogwood seat), Colin Mills (three-year At-large) and Rachel Muir (one-year At-large), have banded together to form an unofficial ticket of candidates concerned with the environment.

“We need to have partnerships,” said Muir, a USGS scientist. “We have limited ability to protect resources. A lot of the responsibility falls to the county. Partnerships with county are one of the key ways [to ensure open space].”

Partnerships also came up again in response to a question on how RA can minimize traffic impact as Reston grows.

“It comes down to money,” said Mills, currently the Reston Citizens Association president. “If we are going to make the kind of investments, going to need money — from developers and state transportation funding. At the Master Plan passage, the [Fairfax County] supervisors  called for a process to look at transportation  funding. RA needs to be part of process.”

Shannon added that there needs to be an effort by RA to encourage residents to use other modes of transportation besides cars.