More than a dozen years ago, the idea was hatched to offer commemorative bricks to Restonians for a permanent place at Lake Anne Plaza.

Since then, nearly 700 bricks have been dedicated at Reston’s original village center, says Lynn Lilienthal, longtime Reston resident and former chair of the Reston Historic Trust.

And with Reston’s 50th anniversary and founder Robert E. Simon’s 100th birthday approaching next month, 2014 will be a big year for commemorative bricks. About 50 bricks will be dedicated at the 2014 Founder’s Day on April 5. That’s about twice as many as in a typical year, says Lilienthal. 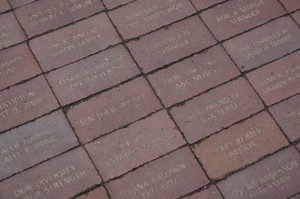 “When we started the project, we thought it would be a good fundraiser,” said Lilienthal.

While the nonprofit Reston Historic Trust does make some money from the bricks, Lilienthal says she is proud of the way the bricks have turned into a historic timeline of Reston founders, original residents and other people who have had an impact on the community over the years.

Most of the bricks honor people who still live in Reston, but many memorialize those who are no longer with us. The latter is particularly important at the 50-year mark, as many founders have died, Lilienthal says.

Simon purposely designed Reston without a cemetery as he thought the funeral home business was money-hungry. So the bricks serve as kind of memorial, though Lilienthal makes it clear “they are commemorative, not a graveyard.”

This year, seven bricks have been purchased by “The Kids on The Plaza,” a group of people who grew up in Reston and are now in their 40s and 50s. They raised money to honor 11 among them who died young but will now be memorialized near where they spent so many good times at Lake Anne.

If you are looking for a particular brick, stop by the Reston Historic Trust and Museum at Lake Anne Plaza. The museum has a database of where each brick is located.