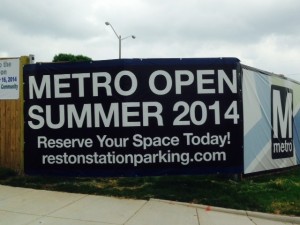 Reston Now readers had a lot to say about Metro’s Silver Line this week.

Metro is in a 90-day training and testing period for the 11-mile rail extension that will run to Reston’s Wiehle Avenue. But with no opening date set — and Metro’s frustration with Dulles Transit Partners’ progress on post-operational readiness repairs — potential riders in our community are getting restless.

Here is what reader commented on Reston Now this week:

DTP [Dulles Transit Partners] and Bechtel are behind schedule on half the items,” Metro deputy general manager Rob Troup said in a conference call with reporters on Monday. “We expected them to be further along.” (Monday June 9th 2014.)

Mr. [Metro Deputy GM Rob] Troup said that only 4 items on the punch list have been closed out or done so far.

I am downright angry now.

I’ve a good mind to go Bechtel’s Reston Office and demand to talk with
someone in charge re: the foot-dragging by them and the contractor on part one of the Silver Line.

Beware my wrath in September if the Silver Line is not up and running safely. I know how to organize people and I’ll organize protests. Picketing, Street-Theatre and an invasion of Bechtel’s Reston office.

I’m still trying to figure out if the Silver Line “opening” is a joke, a mirage, or a nightmare.

There was also concern over the cost commuters will pay if they take the Silver Line to downtown DC daily. Advocacy group Reston 2020 analyzed what commuters will pay and found a large increase from the current system of taking a Fairfax Connector bus to a Blue/Orange line station.

So my commute now costs $5 more per day and it’ll still take me 45 minutes to get to work. Tell me why this is a good idea again?

The $2.9 billion Silver Line Phase I is more than six months behind schedule. Phase II design work is underway. That phase, which will run from Wiehle Avenue to Reston Parkway, Herndon and Dulles International Airport, among other stops, is slated to open in 2018.

One report, citing union sources, has Phase I slated to open July 28. Metro officials have not confirmed that, however.

Have something to say? Join the conversation by posting in the comments below.