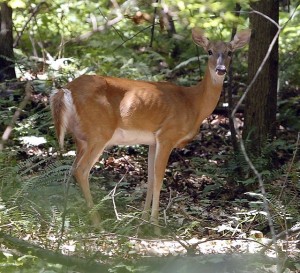 The Reston Association Board of Directors voted on Thursday to allow residents of Sourwood Lane to hire a deer hunting service to help control the deer population on their property.

The owners of 11624, 11626 and 11628 Sourwood Lane, located off of Glade Drive in a wooded area of South Reston, say they want to reduce the deer population near their homes as deer have destroyed vegetation and may harbor Lyme Disease-carrying ticks.

At Thursday’s meeting, the directors heard pleas from neighbors of the Sourwood families, as well as residents of Buckthorn Lane, where RA has allowed a deer hunt since 2010 after a Buckthorn homeowner has a similar request approved by RA. Four members of that homeowner’s family have Lyme Disease, which is carried by deer ticks.

There were also three speakers who asked the board not to allow the hunt.

“It is amazing there are people who suggest the compassionate response to this is to do nothing,” said one resident of Triple Crown Road. “It is exactly the opposite — Doing nothing is in fact not really possible. Good stewardship requires difficult choices. A vote to deny is to vote in favor of more disease and more starving deer.”

Sourwood resident Larry Gsellman, who filed the initial request, said the plant destruction will eventually cause soil erosion. He also said the homeowners have tried many ways to rid the properties of deer, including a liquid fence, rotten egg sprays, and Deer-Vic, a deer repellent paste smeared on fenceposts.

The deer hunt, using crossbows, will be conducted at owners’ expense on the three lots (totaling  1.45 acres), by Suburban Whitetail Management during the urban archery season that begins Sept. 7. The state of Virginia and Fairfax County both allow for hunts on private property, but in Reston, permission also must be obtained from RA.

Suburban Whitetail Management says the hunt is done from treestands at least 12 feet hight. Arrows are shot at a downward angle, making it safe for neighbors and other animals.