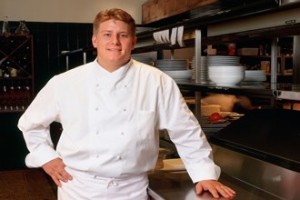 PassionFish chef Chris Clime will be on national TV Monday night as he tries to put a new spin on a favorite snack.

Clime will be a contestant on Rewrapped, a Food Network show airing at 8 p.m. in which chefs compete to put a new spin on old favorites.

PassionFish is also hosting a watch party in the bar to cheer on Clime.

Rewrapped, which began airing last spring, challenges three contestants to transform iconic snack foods. Previous episodes have taken on Twinkies, Goldfish and SpaghettiOs. First, the challengers attempt to duplicate the original item from scratch. Then, in the second round,  they reimagine the food in a completely original dish. Clime’s episode concentrates on Cheez Waffies, a snack featuring cheese spread such as Velveeta.

The show is hosted by former NSYNC member Joey Fatone.

Clime has been executive chef at PassionFish since it opened at Reston Town Center in 2008. Among accolades for Clime and PassionFish: