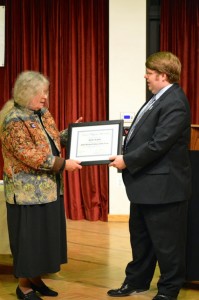 With the Fairfax County Public Library facing budget cuts and system scrutiny, one Reston resident has found a strategy to save some of the lesser-used books from shelf extinction: simply check them out.

Kathy Kaplan, whose library activism earned her Reston Citizens Association’s Citizen of the Year award earlier in 2014, says going to the library and simply checking out books will save them.

“We have lost thousands of nonfiction books in good condition since February, 2014,” says Kaplan. “Especially vulnerable are large art books, which are often only used in the library and not checked out because of their size and weight.”

“Patrons can check out books,” said Kaplan. “Once books are checked out, they are protected for two years. Two years from now we will have a new library director, and hopefully the new one will value the library as a place of learning and literacy. You can check out 50 books. Check out art, poetry, philosophy, science, history, biography, ethnic cookbooks. And don’t forget the children’s nonfiction. It’s the only way we have now to protect our collection. Think of it as a civic and patriotic duty.”

Kaplan, a children’s book author, helped bring attention in 2013 to the library system’s discarding — rather than recirculating — more than 100,000 books. The library board then amended its policies and scrapped a proposed Beta plan to change the staffing structure at several libraries, including Reston Regional.

The Fairfax County Public Library system is facing a budget crunch. Both spending per library and and money from the Fairfax County Board of Supervisors are down by more than a third over the last six years. The system had to slash more than $649,237 from the FY 2014 budget.

Kaplan says low-demand items are books that have not been checked out for 24 months. Currently, low-demand books are transferred to Technical Operations. When they get there, many are being discarded, she said.

“Many neighboring library systems keep their books on the shelves for five years before they are considered for weeding,” said Kaplan. “Even then, I am told by librarians in other library systems, they are very reluctant to let go of nonfiction works. Nonfiction is the heart of any library’s collection. Our children need nonfiction for their school papers. Information from the Internet is often incorrect and incomplete.”

Kaplan says she has a variety of books checked out from the library that she has saved from the “discard stream.” Among them: Art books with the works of Lorenzo Ghiberti, Susan Rothenberg, and Jack Yeats;  “The World of African Song,” by Miriam Makeba; the Collected Poems of Vasko Popa, a Serbian poet; a book about Picasso’s “Guernica,” and a cookbook about stews.