It’s a big week for Reston with Saturday’s opening of its first Silver Line Metro stop.

Metrorail will connect Reston in a straight shot with Washington, D.C., making the community an attractive option for both residents who work in Arlington or D.C. and workers in Reston who live to the East.

This week’s Classic Reston takes a look at he community’s quirky public transportation link of the 1970s.

When Reston was founded, the “Live, Work and Play,” motto was in place, but in reality, the “work” part was a work in progress. Most Restonians worked in D.C., and it was a long commute with no Dulles Toll Road or Orange Line Metro to Vienna.

But Restonians saw the need for a commuter transit, so — in the true pioneer spirit of the place — they founded a service themselves.  In the early 1970s, the Reston Community Association (RCA) and Reston developers Gulf Reston, created the Reston Community Bus Service (RCBS). 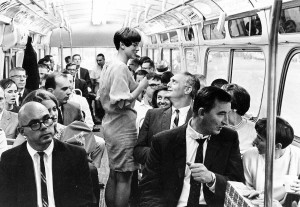 Some in Reston nicknamed the bus “the booze bus,” since there were free-flowing drinks onboard. Well, it was a long commute.

The drinks dried up in 1972 after a commuter threatened to complain to the Virginia Alcoholic Beverage Control Board.

“We will inform our riders they are confined to Coke and potato chips unless we hear otherwise,” Reston Commuter Bus officer Howard Pearlstein told an Associated Press reporter in February of 1972.

After that, if you wanted to get into D.C., you were on your own — until now.

Reston’s new era begins at noon on Saturday, when the first train pulls out of Wiehle-Reston East heading toward Tysons Corner, Arlington and Washington. Find schedules and fare information on Silverlinemetro.com.

And remember, no eating or drinking on Metro — and certainly no cocktails.