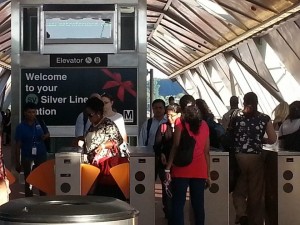 With the first rush hour in the books, Metro officials can now get a clearer picture of how daily traffic will be at the five new stations, as well as the Silver Line’s impact on existing stations.

As of 10 a.m. Monday, Wiehle-Reston East — which will be the end of the Silver Line until 2018 — was the 12th-busiest entry point to the system, says the transit agency. Metro says 4,727 riders boarded trains at Wiehle-Reston East, putting it on par with Columbia Heights and busier than Rosslyn or Ballston.

Reston is the only Silver Line station with parking, and riders made good use of the 3,300 available garage spots, as well as 300 free spots in the county-owned former Park and Ride lot on Sunset Hills Road. Wiehle-Reston East is also the new bus drop off for Fairfax and Loudoun connector buses that used to travel to Orange Line stations.

“We are off to a really good start at Wiehle,” said Metro spokesman Dan Stessel.

Stessel said there were no big surprises from the morning commute. Most commuters said their commute went smoothly once they understood new info such as where to park or where to pick up their connector bus. Read some of their stories in this Reston Now story.

“We spent a lot of time preparing for today,” said Stessel.

Metro says there were 9,715 total trips from or to a new Silver Line station Monday morning.

Here is the breakdown:

“The last four stations of the Orange Line saw morning rush hour drop from 23,000 boardings two weeks ago to 15,000 today,” Stessel said. “Those boardings have shifted to the Silver Line.”

However, the total number of overall Metro riders did not grow much on Monday. Stessel said 240,000 rode the train in the morning, which is was within a few hundred of last Monday’s numbers.