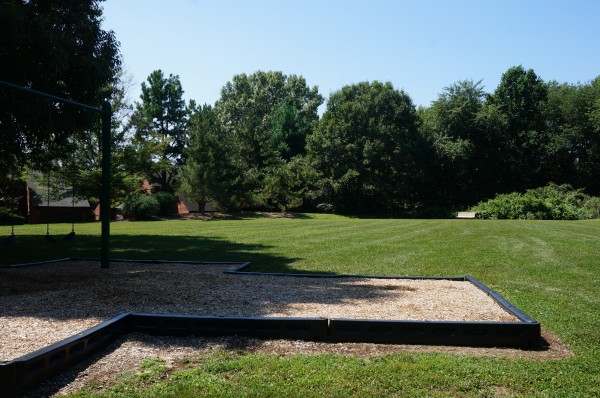 Reston Association has decided to continue with its proposal to construct a bocce ball court at a pocket park off of South Lakes Drive. But Several Cabots Point-area residents are still unhappy with that decision and have pasted signs on benches at the tot lot near where the court will eventually be located.

The bocce court was first approved by the board last December, with the projected $2,500 cost to be paid for by Friends of Reston.

The signs at the park call out RA’s process, as well as the loss of open park space.

Reads the sign: “Say NO to Proposed Reston Association Bocce Ball Courts! Richard Chew, a board member of the Reston Association, has proposed taking up a large portion of this Cabots Point Park where our children have played for many years with two adult bocce ball courts. This is one of the smallest children’s parks owned by RA. If you don’t believe this is an appropriate use of this park’s space, let RA know.” 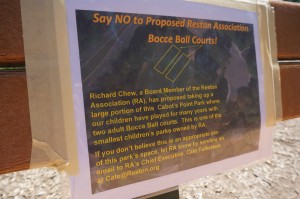 Several concerned residents previously contacted Fulkerson, mostly regarding what they say was a lack notice prior to voting for the amenity.

That lead Fulkerson to propose two weeks ago to take bocce off the table and start over. Fulkerson said at the time several RA members who live near Cabots Point contacted RA “concerned that proper notification and opportunity for public input or a hearing was not made regarding the proposed project and change in use of the recreation area.”

Fulkerson’s proposal was voted to be taken off the agenda prior to the meeting, after Chew pointed out that proper procedures were followed and he received positive feedback from neighbors.

“In general, the plan was met with great enthusiasm,” Chew said at the July 31 meeting. “The bocce court was explained and discussed. No one expressed any concern.”

South Bay resident Bill Parker says the first he heard about the plan was in June. He said a mailing by RA to residents of nearby clusters never got to homeowners.

“It’s really not about bocce,” says Parker. “It is about the process [RA] used to make this happen. There is no documentation of any discussions. [Chew] talked to people at the park, not people who live in South Bay cluster. I don’t care if it is a flea circus or a ferris wheel. The problem is they didn’t tell anyone this was going to happen.”

Parker does have some thoughts on bocce, too.

“This park is not very big,” he said. “The bocce court will be 13-by-60 feet, and that does not include benches and trash cans. There may be a second court eventually and then this is a bocce park.”

A woman playing with two young boys at the park on Thursday morning said building a bocce court does not matter to her.

“I don’t see what the big deal is,” she said after reading the bench sign. “Kids will just run through the court [like they do through the field] when no one is playing ball.”

RA does vow to provide better notification in the future. Earlier this summer, the RA board established a new  development review process that formalizes community engagement procedures.

“As Reston continues to grow and develop, Reston Association believes it is imperative to involve the community in decisions which directly impact neighborhoods, clusters and Reston residents,” said RA spokeswomen Kirsten Carr.

“With the passing of Land Use Resolution 1; Procedures for Comment on Development/Redevelopment Projects in Reston (passed in June of this year) and the establishment of the Reston Development/Redevelopment Plan Review Process, a precedent and a process has been set to involve the affected community members early in the process. The recent meeting at the Pony Barn Recreation Area to discuss plans for its future is a prime example of that process in action.”