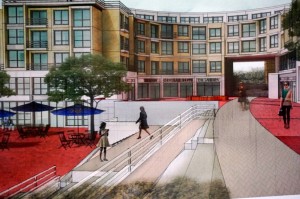 However, many of them have upcoming hearings and other important dates coming soon.

Here is a rundown of what to expect.

The revitalization plan for Crescent Apartments and the surrounding area near Lake Anne Plaza has been in the works for nearly a year. Lake Anne Development Partners were chosen by the county in summer 2013 to transform the county-owned affordable housing development.

LADP plans include replacing the aging 181-unit Crescent Apartments with slightly more affordable housing, as well as mix of townhomes and multifamily dwellings. In all, about 1,000 new residential units are planned, as well as a new retail plaza, new access points to historic Lake Anne Plaza and more than 130,000 square feet of new retail and office space.

Plans also call for housing for seniors and a boutique grocery store.

LADP’s plans will go before the Planning Commission in a public hearing Nov. 5. If the planning commission recommends approval, the plan will go to the Board of Supervisors Nov. 18. Both of those dates are subject to change.

LADP CEO David Peter says he hopes to begin construction in 2015. The revitalization is expected to be a multiyear process.

Meanwhile, LADP has reached an agreement on a land swap with Reston Association. By obtaining a one-acre plot near Lake Anne Village Center, LADP can now proceed with plans to build a 120-space parking garage.

Novus Residences has filed with Fairfax County Proffered Condition Amendment, Development Plan Amendment and a Planned Residential Community application in order to build on the site of  Lake Anne Fellowship House at 11448 and 11450 North Shore Dr.

Current residents of Fellowship House, a residence for low-income seniors that is badly in need of renovation, will be moved to the new building.

A Planning Commission date is scheduled for Sept. 17, 2014 at 8:15 p.m., with a Board of Supervisors public hearing  scheduled for Oct. 7. Those dates are also subject to change.

Swicord has been operating the art studio from her home at 1398 Concord Point Lane for many years. Previously, the enrollment was eight students at a time. Swicord wants to increase enrollment to 18 students on Mondays and 12 from Tuesdays through Fridays from 4 to 8 p.m., and the county requires a special exemption to do that.

She is also proposing a Summer Camp, Monday – Friday from 8:30 a.m. – 5:00 p.m. daily, with an enrollment of 12 students.The Planning Commission public hearing is tentatively scheduled for Thursday, Oct. 9.

The planning commission public hearing has been indefinitely deferred.