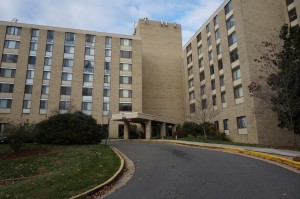 Plans to redevelop Lake Anne Fellowship House have been put on hold indefinitely — and it looks as though some current residents of the affordable housing for seniors may have to pay higher rents in order to stay in the building.

Fellowship Square and Novus Residences had been working for more than a year on plans to tear down the senior housing in need of remodeling and rebuild on the site 140 affordable housing units as well as 285 market-rate housing units.

The plan was organized separately from Republic Land Development’s large revitalization project at Crescent Apartments and the area near Lake Anne Plaza. An initial Fairfax County Planning Commission hearing had been scheduled for later this month.

Lake Anne Fellowship House currently has 240 units for seniors, 114 of which are subsidized. The building, which was built in the early 1970s and does not meet all Americans With Disability Act standards, also has a 20 percent vacancy rate.

The Fellowship House Foundation notified Fairfax County zoning officials last week that the application was deferred “due to our inability to advance our land use proposal in a manner that will produce the best possible outcome for our residents.”

From the start, the proposed project had an obstacle in that there are two different mortgage holders for the six-acre property: The Department of Housing and Urban Development for the west side and the Virginia Housing Development Authority for the eastern half.  Both would have to agree to consolidate and retitle, and Fellowship House board member John Thillman predicted last year that that could prove a long — and possibly fruitless — process.

Edward Byrnes, a member of the Fellowship House Foundation board and chair of its Lake Anne Redevelopment Committee, wrote in a letter to county officials that he still believed that foundation’s plan was a good one in spite of criticism that many low-income seniors would be displaced.

“We still believe that our proposal for 140 permanently affordable senior housing units and 285 market-rate units is the best available means for replacing our aging residential complex and retaining affordable housing for seniors in Reston for the next 40 years,” Byrnes wrote. “We arrived at this proposal after several years of reviewing alternate solutions … In the end, we concluded that a self-help strategy of using the increased value of our land at Lake Anne Fellowship House to finance the rebuilding of our complex provided the most dependable and achievable solution. “

Byrne said there were several meetings with Fairfax County officials over the summer, but the county was not receptive to the idea of offering Section 8 housing vouchers to existing residents, which the Fellowship Foundation needed in order to progress with the zoning application.

Byrnes says that a portion of the mortgage at Lake Anne Fellowship House will be paid off in September 2016. Wrote Byrnes:

The subsidy program associated with Lake Anne II no longer exists and we have no ability to extend the subsidy beyond the maturity of the mortgage. Without the ability to advance our project as proposed, we have lost the ability to prepay the mortgage and access the expanded housing safety net for our current residents. Therefore, we must now turn our time and attention to preparing a significant portion of our residents for the loss of their existing housing subsidy and, likely, their ability to pay rent.

For Fellowship Square Foundation, we will be forced to raise rents to market rates for those units that have lost their subsidy to cover the expense of operating this building.”

This is not the outcome we want, but the consequence of our inability to proceed with our redevelopment proposal. We have been criticized by the county for proposing the build only 140 affordable senior units rather than replacing the current 240 units. But, as we have stated, the value of our property is limited and that limited value can only produce  140 new, affordable senior housing units.

Ironically, by failing to support our redevelopment proposal, the community will still lose 100 affordable senior housing units. The difference is that the remaining 140 units will be aging, 40-year-old units rather than new units.